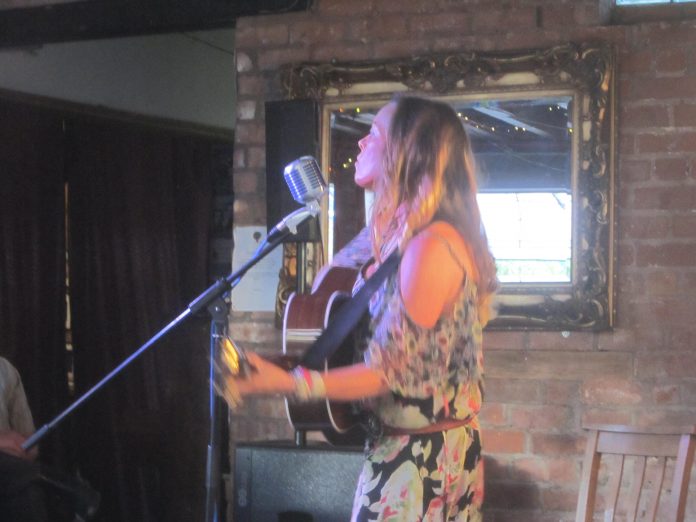 It`s a pleasingly warm evening at this intimate venue to welcome the return of Americana come folk singer songwriter Rachel Harrington. We are warned in advance that she`s just polished off a plate of bangers and mash so anything could happen tonight. Rachel has a new album “Hush The Wild Horses”, her first in seven years so not surprisingly, we enjoy a few cuts from it this evening. Indeed, the title track is shared. Rachel explains that the song came from not only rescuing a couple of horses from slaughter, whom she`s called Waylon and Loretta but falling in love. Rachel derives most of her songs from simply talking to people, arriving in dreams or driving the Interstate I55 and narrating thoughts and melodies into an I pod. One such is the heart breaking `I Meant To Go To Memphis` which was from talking to a guy, who was working with her son and a reason he gave for ending up there. The intense `Drinking About You` and rockabilly-styled offering `Drop Zone` follow. The latter being based on an Army marching cadence. Rachel`s partner is an Army Colonel and explained that these cadences are sometimes called Jody calls or jodies, after Jody, a recurring character who figures in some traditional cadences; Jody refers to the man with whom a serviceman’s wife/girlfriend cheats, while they are deployed. The first half closes out with a Mississippi John Hurt cover `Louis Collins (Angels Laid Him Away) ` and another track from the new album with a song written about Rachel`s brother, who has struggled with addiction called `Save Yourself`

The second set opens up with a Bob Dylan cover `Lonesome When You Go` before `You`ll Do` a song that was written about an old boyfriend. Rachel grew up in a Right-Wing Pentecostal family and her Grandfather was a Preacher, where speaking in tongues was almost a normal part of the church service.

Taking to her Grandfather Spencer one visit and enquiring as to how he was, his reply allowed her to write the song `He Started Building My Mansion In Heaven Today`.

The Me-Too Movement is spoken about as the harrowing but compelling `Child Of God` from the new release is shared. Bars were a source of Rachel`s inspiration before she quit drinking and in a bar on Bainbridge Island in Washington, where she used to live, she witnessed a rare performance from Art Hanlon, who allowed her to record a song of his called `Spokane’.

The show closes out with a couple of more cuts from the latest release and a cover. Rachel dreamed that Gillian Walsh was playing a song that she`d never recorded and woke up with some of the melody which inspired the wonderful `Get Out While You Still Can` She also has singer songwriters who talk to her such as Paul Simon and Tom Petty but it was Lyle Lovett that encouraged her, in her thoughts to write `If Wishes Were Horses` The closing song is a singalong in the form of Bobby Gentry`s 1967 hit `Ode To Billie Joe` The enthusiastic crowd wouldn`t let her go before she shared a final song, which she was happy to do so with the gospel flavoured `I Don`t Want To Get Adjusted To This World’.

This was a delightful evening in the company of a seasoned raconteuse who shared some charming insights into her life observations that she has managed to convey into meaningful songs that will have you in all kinds of emotional turmoil. An artist that can really touch not only your head but your heart.

There are a few days left to catch her while she`s here in the UK, I’d encourage you to do so.