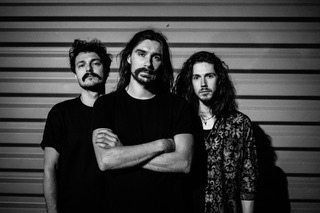 The immense success of Psychonaut’s Pelagic debut album Unfold The God Man, which has been repressed 3 times throughout the pandemic and sold close to 3000 vinyl copies to date, has proven that Psychonaut are a force to be reckoned with.

The three gentlemen from Mechelen, Belgium now return with a ferocious and muchly anticipated concept album that proclaims the formation of a new world through the acceptance of a new human identity. “We’ve always been interested in religion, spirituality and philosophy,” explains vocalist/guitarist Stefan de Graef about the music of PSYCHONAUT. “We’ve meditated together, had long discussions about the nature of life, and we share a common vision.”

Now, with the release of their sophomore album ‘Violate Consensus Reality’ on 28th October (Pelagic Records), the Belgian three-piece take you on a visceral trip into our collective human consciousness. A journey marked by explosive riffs, soaring vocals and intricate yet catchy compositions.

An impressive album which cements PSYCHONAUT’s standing as aspirants to the throne of the contemporary European progressive / post metal community. On new single ‘All Your Gods Have Gone’ the band add,

“This track is one of the shortest and heaviest tracks we’ve ever written. We don’t usually allow ourselves to put too much anger into our songs because we try to focus on the positive, but this album made us realize that it can actually be a very healthy thing to give into your anger from time to time. There’s no use in ignoring it because that only makes it grow. The lyrics to this track were very cleansing and healing to write in that way.”

Violate Consensus Reality engages the senses in a way that is quite rare for concept albums, it is raw and brutal, unlike the lofty concept albums of yore with their endlessly repeating motifs and needlessly complex song structures. It stands in a long tradition of activism in music, but it also deconstructs this tradition by taking its loud and admonishing tone and providing it with a thoughtful base rooted in philosophy and spirituality.

With music deeply rooted in communal meditation sessions, psychedelic metal outfit Psychonaut are a unique entity in the Belgian metal scene and beyond. The mantric title track of their upcoming second album, which they have now shared, sees the trio once more aligned in body and mind as they appeal to the listener with a 9-minute atmospheric slow burner. Their stature is once more affirmed by Amenra’s Colin H. van Eeckhout, who ushers the track to an unforgettable climax.

Psychonaut have played big Belgian open air festivals like Alcatraz, Rock Herk or Boomtown Festival and boutique festivals like Soulcrusher, Roadburn Redux or A Colossal Weekend. The band has supported bands like Amenra or Brutus and they just concluded a European tour with Pelagic label mates The Ocean and PG.Lost. They have a bright future ahead of them, and tickets for their album release show at the 800 capacity AB venue in Brussels are selling fast.

We gave you a fair warning.