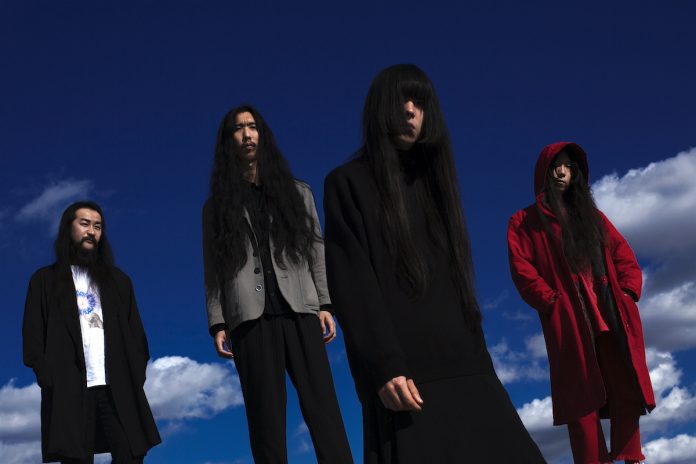 Alcopop! Records are delighted to announce that they have signed London-based Japanese alternative-rock band BO NINGEN and will release their fourth studio album, Sudden Fictions, in Spring 2020.To celebrate the signing, the band have today revealed their new single ‘B.C’—the first track to be taken from their forthcoming new record, set for release 13th March 2020 via Alcopop! Records on limited edition clear 7″ (500 copies), backed by a remix B Side from renowned Japanese experimental footwork producer Foodman.Commenting on the news, label boss Jack Clothier says: “As if we’ve signed BO NINGEN!? One of the best live acts we’ve ever seen, and the music coming up is just unreal…we’re absolutely delighted to be welcoming them to the label, and even more delighted to be sharing ‘B.C’ with you. What a band.”On the new material, guitarist Kohhei Matsuda says: “After years of countless bifurcation into sub-genres, music has been cut down to flakes. Music is suffocated. This album is a challenge to bridge between now and the time before the first bifurcation. To alternate the future.”‘B.C’ is a telling first look at Sudden Fictions—an ambitious attempt to present musical history as open structure in the simple form of a rock band; a “rock band” questioning itself as to what it can do, in this time of bedroom producers. “If this apparent history of music has its root somewhere, and that root leads to a present where rock bands are being pushed away,” explain the band, “we thought we could dig deep enough to the root, and re-write the present—finding a new path leading through an alternative history as a rock band.”

With three studio albums to date winning them a host of huge-name collaborators and fans (including Alexander McQueen, Douglas Hart, Damo Suzuki, Jehnny Beth, Hedi Slimane, Juergen Teller, Lydia Lunch, Faust, NTS Radio and many more), BO NINGEN’s iconic look and quest for artistic invention is only surpassed by their intense live performances, which have earned them a place as one of the most captivating live acts in the UK, and saw them voted ‘Best Live Act of 2018‘ by festival-goers for their appearance at Green Man Festival.The Guardian, i-D, DAZED, Love Magazine, Nowness, Design Week, NME, The Quietus, DIY magazine, and CRACK Magazine have all hailed them for their chaotic & anarchic onstage performances, often leading to personal injury. Rightly so, as their now-fearsome live reputation has earned them a host of global tour dates alongside such notable artists as Nick Cave, Primal Scream, Super Furry Animals, Kasabian, TV on the Radio, The Fall, Savages, WIRE, The Cult, The Horrors, Temples, Keiji Haino and many more.Over the course of their career the band have featured on line ups at some of the world’s biggest festivals—including a personal invitation to Yoko Ono’s Meltdown Festival—appearing at Glastonbury, MIDEM, Coachella, Fuji Rock, Iceland Airwaves, Summer Sonic, Reading & Leeds Festivals, Primavera, Canadian Music Week, End Of The Road, SXSW, CMJ, Big Day Out, The Great Escape, and scores of other events including the Venice Biennale (in collaboration with Tim Noble and Sue Webster), Frieze Art Fair (in association with ICA), and Doug Aitken’s Station To Station at The Barbican. The band were featured at the 2019 Sheffield Documentary Festival for a one off event mixing several short films by Toshio Matsumoto and Bo Ningen’s live show, and teamed up with ‘Deeper into Movies’ to create a unique recreation and performance of the soundtrack to the seminal film ‘The Holy Mountain’ directed by Alejandro Jodorowsky. With two sold out screenings at the Rio Cinema in Dalston, a subsequent screening and live performance occurred at Sensoria Festival in Sheffield in October 2019. The project was nominated for ‘Event Cinema Campaign of the Year‘ by Screen Daily Magazine. Following frontman Taigen Kawabe’s recent tour dates supporting black midi under his III Japonia guise, further details of Sudden Fictions will be announced in the coming weeks.‘B.C’ is released on 13th March 2020 via Alcopop! Records