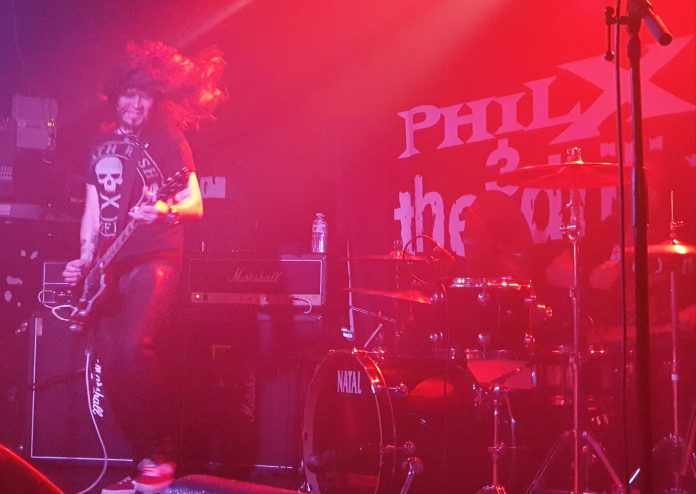 Local boys Devil’s Dice are clad in their dark glasses tonight. Whether this is a comment on the fact the future is so bright they gotta wear shades I don’t know (although they do have an EP out at the end of the month) but its more likely that this is what rock stars do. And this is very much rock star fantasies being lived out, right here. Singer Matt Gore, a veteran of the West Mids metal rock scene, is an excellent frontman, its just here, he is the frontman of a hard rock band. And it suits him. He and  the band – very much built around twin guitarists David Clark and Chris Webb – are clearly enjoying playing the likes of “Chameleon” and “Destiny Calling”, but it’s the way they take on ZZ Top’s “Tush” that convinces of their credentials. Not southern rock rockers by any means, they do it in their own style, as if to prove their talent. “And now I am off to get drunk” says Gore. As Thursday nights go, its how Devil’s Dice roll…. 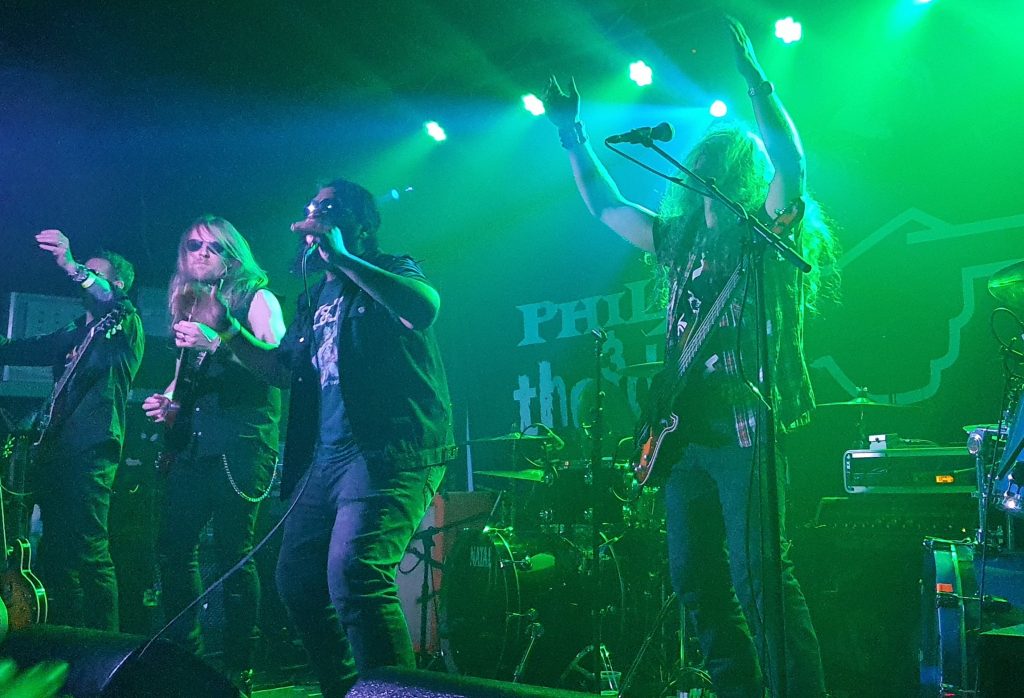 About two thirds of the way through their set later in the evening, the headliners invite Collateral’s Angelo Tristan to the stage, to sing The Kinks’ classic “You Really Got Me” with them. “Invites” is probably too strong a word for it, given that the frontman has never seen a stage he didn’t want to be on, but watching him rip it up here, you do realise his skills probably belong in a bigger venues than this. His own band’s half an hour here proved that they might get there themselves. Their full length debut, released last month was choc-a-bloc with crackers and they play six of them here. “Mr. Big Shot” is probably the pick, although “Midnight Queen” aches to be Bon Jovi – and were it one of JBJ’s it’s a Gold Disc in waiting – “About This Boy” (and in a way it all is) is autobiographical, and “Lullaby” ends what amounts to another shot across the bows. They’ve been announced at Ramblin’ Man Fair today, and make no mistake, expect to see Collateral attempt to make the whole weekend all about them. 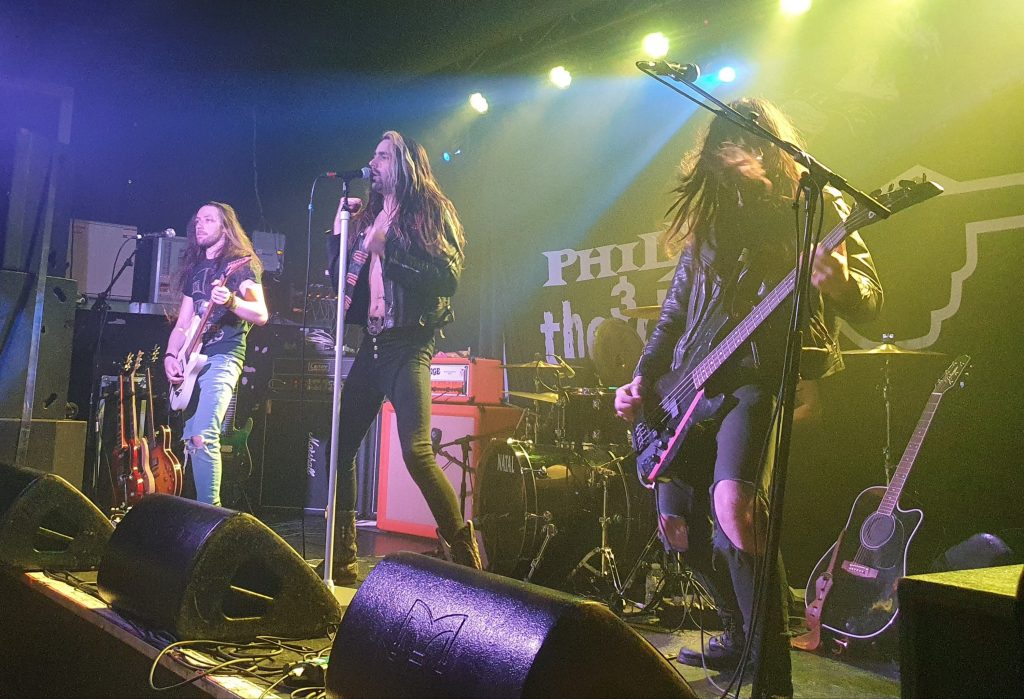 On hearing Phil X And The Drills “Stupid Good Looking’s Vol 1” EP last year, my immediate thought was “ok, that wasn’t what I expected.” Seeing the band live here tonight, for the first time, the feeling is the same.

A power trio – and X is a brilliant guitarist, that much is clear – they are heavier, cheekier, and more full of jams than you might have thought.

Tonight is not just the last night of the UK run anymore. Rather because of Coronavirus, the rest of the Euro jaunt is off. If they are upset about it (they are, because the main man mentions it about five times) then it doesn’t show, as they merrily rattle through two hours of rip-roaring stuff.

Their own stuff, opener “You’re Not Happy, Till I’m Not Happy” is a good example, but so is “Something To Say” from last years EP is fuzzed up and bluesy, and X’s vocals are raw too. Musically, it reminds of Jared James Nichols, perhaps and these, particularly “I Wish My Beer Was As Cold as Your Heart” are real audience favourites. It is striking, to me at least, just how many of these solo songs are well known to the crowd.

But then there’s the others too. The covers. The jams. The thought that this is The Drills having fun. “Whole Lotta Love” segues into “Walk All Over You” and “Sunny” does likewise to “Maneater” and “Hotel California” – and that rather sets the tone.

He plays “Beautiful Apartment” alone, but there’s a mammoth band solo to follow, and because he’s in Black Sabbath territory (we invented heavy metal in Brum, just to be clear) they all do “Rat Salad” and “Fairies Wear Boots”, and why not? Good versions too, in fairness.

Not shy of a double-entendre, the affable X knocks out “Kiss My Troublemaker” and “Rock N Roll You All Night Long” before finishing with “Fire”, and that’s just fine, because there’s been a Hendrix-y feel to most of this anyway.

As if they doesn’t actually want this to end, there’s even a lengthy encore. Made up of one of their own – “Playing Fair” – and two of someone else’s – “Funk 49” by James Gang and “Communication Breakdown” from another band just up the road (we did alright around here to be fair) and it’s the love they all have for the craft that shines through.

And that’s actually why they deserve credit. Phil X doesn’t need to be here, but he wants to be. A lengthy set underlines it, and they never stop smiling throughout. More credit too, for not playing anything by the “day job” group (if by some fluke you don’t know what band he’s in, Google it. Without them there’d be no MV that’s for sure).

But its not their night. It’s Phil X And The Drills night. And the audience too, they were here for the ride. And as X shouts: “We’ve been the Drills, baby, thank you!” at the end, you can’t help but feel whatever else he’s done in his varied career, this is his band.