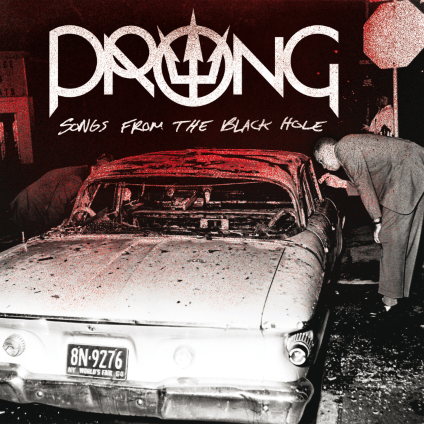 Tommy and the boys explore their influences

The covers album. Always kinda odd. More fun for the band than the audience, you always suspect. And yet, sometimes it works quite nicely. When this reviewer was a kid of 16 or 17 Skid Row released “B-sides Ourselves” where each member took a track from their favourite band and played it. It opened the eyes of a new generation to some artists that we might not have known.

Whether this record does the same for legions of Prong fans is open to question, but there are a vast array of influences in the ten tracks here: bands as diverse as Neil Young, Fugazj and Sisters Of Mercy are all present as Tommy Victor lays his favourites on the line.

“…..Hole” begins with a charged up, thrashed up “Doomsday” by Discharge and there are very few pauses on what is a breathless collection. “Goofy’s Concern” originally by the Butthole Surfers is particularly impressive – not least because of the Herculean amount of swearing contained in its nihilistic lyrics, while the brilliant bass heavy groove of Black Flag’s “The Bars” is suitably aggressive.

“Don’t Know If You’re Lonely” by Husker Du, comes on here like a turbo-charged Therapy? From the “Troublegum” era, while “Banned In DC” from Punk pioneers Bad Brains is refreshingly unrestrained.

“Music From The Black Hole” saves it’s best for last and steps out of its comfort zone for Neil Young’s “Cortez The Killer” which begins with a mesmerising solo from Victor and works it’s way around exceedingly well.

Ultimately anyone can argue about the merits – artistically or otherwise – of a covers album, but there are a number of things here. Firstly Tommy Victor and Prong have earned the right to do whatever they feel like doing, Ye gods this is the band who wrote “Snap Your Fingers, Snap Your Neck” and more recently “Revenge….Best Served Cold” so if they want to chuck an album like this out, good luck to them.

The real acid test when it comes to covers is surely this though. Are they faithful, pointless versions worthy of the worst type of tribute band, or do they bare the signature of the band playing them? If you didn’t know this was a collection of other peoples songs, you’d think “Music From The Black Hole” was a new Prong record. Therefore it’s job done.