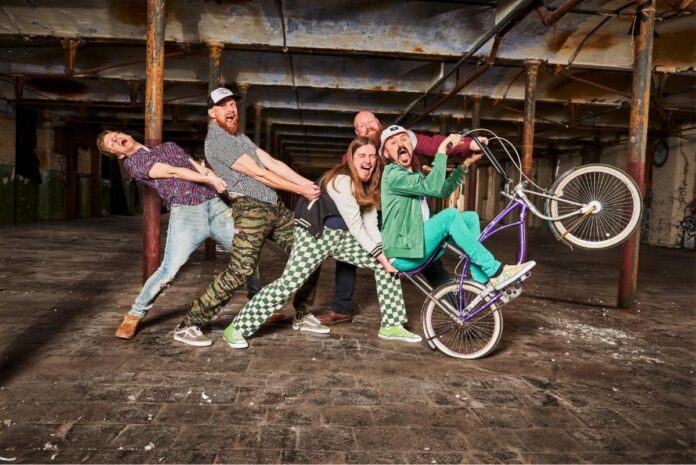 Nationally beloved British rockers Massive Wagons have teamed up with metal legend Benji Webbe (Skindred, Dub War) for their new single “Generation Prime”, taken from their upcoming album ‘TRIGGERED!’, out 28th October 2022 on Earache Records. The track has been honoured with Kerrang! Radio’s ‘Single of the Week’ title this week.

Baz explains the issue that “Generation Prime” addresses, “NOW NOW NOW NOW, got to have it now! Convenience has turned people lazy, addicted to instant gratification, immediate satisfaction, cheap shopping, fast delivery – the prime generation, no awareness of the consequences of the way we live.”

He continues, “This is one of Stephen’s riffs, he brought that kinda ska punk vibe and I immediately fell in love with it. I’d had the idea for the song floating around for a while – I wanted to take a stab at consumerism, and it just worked straight away. The song has got so many sides, it keeps changing pace and direction but remains solid and catchy. Then we have the absolute king, the master of ceremonies, Benji Webbe putting his vocals down on it, and writing some great parts. He has character and style by the truck, and it was an absolute honour to have him on board, always bringing the fire!”

Baz adds, “We all had a feeling about this track from the off, I think it has broad appeal and is a live banger, so it was put in the set immediately!! The crowd just get it straight away, and it sets off the energy at shows, it’s loads of fun to play.”

Massive Wagons are due to co-headline UK venues this year with Ugly Kid Joe on the Comin’ For You! ’22 tour, starting on 3rd November at the O2 Academy Liverpool and finishing at KK’s Steel Mill in Wolverhampton on 11th November.

Baz shares his excitement for the tour, “Absolutely banging times ahead, this UK tour feels like a real step up for us. It’s a massive honour to be heading out with Ugly Kid Joe. These guys were a huge part of our musical upbringing, I remember seeing the tees everywhere as a kid, massive hits, the band were all over record stores and radio, so to co-head a tour with them is a proper moment in our story. I think it’s gonna be party central, both bands bring a big high energy show with a plethora of catchy tunes, it’s gonna go off! I always wanted one of their middle finger tees as a kid but was too scared to buy one in case my mother gave me a bollocking haha. Hope to see you on the road, this tour is definitely one not to miss. Rock on ya rad mothers!”