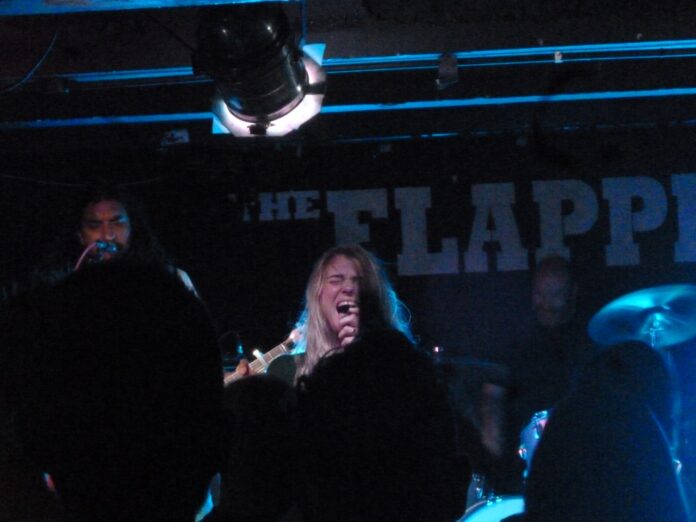 Press Club arrive in Birmingham on the tenth date of the Melbourne band`s tour of Australia, Ireland, The United Kingdom, and Europe to promote the release of their third studio album `Endless Motion`.

There`s little fuss as the band hit the stage in this pretty packed out venue and blast straight into a couple of numbers from their latest album with `Eugene` a track about “being stuck in a cycle of having so many things running through your head, things you need to say but being unable to express them in fear of being taken the wrong way” according to singer Natalie Foster and `Coward Street` with its shimmering guitar riffs and pounding drums.

The band dip into their back catalogue for the blistering `Separate Houses` which becomes almost chant like and `Headwreck` which had all the faithful singing along with the “I`ll bring my A game” strapline. There`s no let-up in intensity as the band share `Less These Days` and `Late Teens` which begins quite sedately before taking off at a rapid pace as the band crash around on and off the stage.

There`s another cut from the latest release with the forceful but reflective `Untitled Wildlife` written during the 2020 bushfires that devastated the ecosystem across much of rural Australia.

A driving pace continues in the final stretch with `My Body’s Changing`, `Endless Motion`, the thought provoking `Twenty-Three` and `Cancelled` a reflective piece that the singer wrote comparing her current self to the more reckless person she was in her former years before closing out this energetic hour long performance with `Suburbia`. The final number is a pretty anthemic piece with the cry of “ I left my heart in the suburbs” stirring the crowd like a call to arms and that was it.

Tonight`s show was an extremely dynamic performance with singer Natalie Foster gyrating and prowling across the stage. Natalie has a varied and powerful vocal range but the unsung heroes are the engine room of drummer Frank Lees, guitarist Greg Rietwyk and bass player Iain Macrae who lay the foundation for the singer to let loose and really express herself.

There`s so much vitality and energy in Press Club`s performance that I felt pretty drained physically and emotionally at the end and I was simply watching from afar! The band seem to have the ability to draw you into their universe, even for just a short space of time and for me it`s worth every minute.