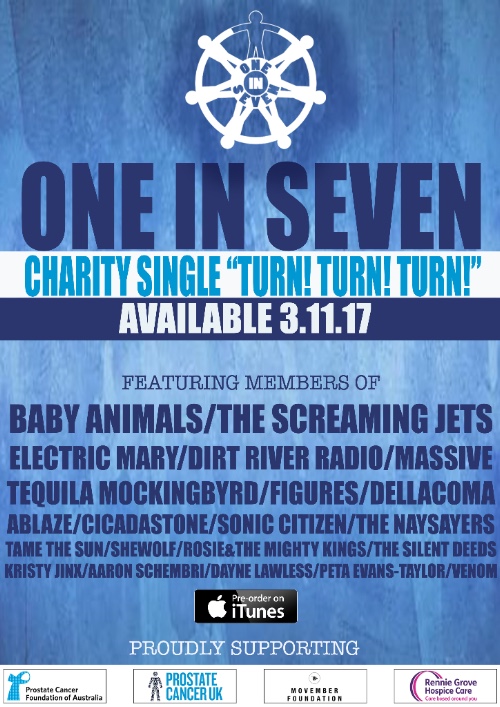 One in Seven is a charity musical project aimed at raising awareness and funds for prostate cancer charities.

The project features a Melbourne rock and roll supergroup formed from members of legendary and up-and-coming bands including Baby Animals, The Screaming Jets, Electric Mary, Massive, Tequila Mockingbyrd, Dellacoma and many more. Project coordinator Josie O’Toole (drummer in Tequila Mockingbyrd) was inspired to launch the project following her father’s recent battle with the disease.

Prostate cancer affects one in seven Australian men during their lives. It is currently the second highest cause of male cancer death yet it is one of the most survivable cancers if detected early (92% chance of survival past 5 years). What many don’t know is that a simple blood test at age 50 (age 40 if family history) could show warning signs years before any symptoms develop.

THE SONG
ONE IN SEVEN have recorded a rocked up version of the Byrds’ classic “Turn! Turn! Turn!” at Lighthill studios with producer Ricki Rae (X-factor, Taxiride) at the helm to raise funds for and awareness of the cause.  An accompanying video was shot on location by Dan Armstrong and Rom Anthonis (Strongman Productions).

It is an upbeat song for the times featuring over 20 vocalists, six drummers, six guitarists and three bassists. It is also the only known version of this song to feature a didgeridoo! The track is led by the dulcet tones of Rusty Brown (Electric Mary), backed up by an all-star cast of vocalists including Peta-Evans Taylor (The Voice), Brad Marr (Massive), Shay Liza (Sonic Citizen), Dellacoma Rio (Dellacoma), Kristy Jinx, Danny Slaviero (Ablaze) and Rosie Conforto (Rosie & The Mighty Kings).

Dave Leslie (Baby Animals) takes things up a notch thanks to a tasty guitar solo with additional licks provided by none other than Jimi Hocking (Screaming Jets) and Ben Laguda (Massive). Rhythm guitar by Aaron Schembri, Shane Rae (Tame The Sun) and Jarrod Medwin (Massive). Holding down the fort is Tequila Mockingbyrd’s Josie O’Toole on drums complemented by the booming bass line of Paul Woseen (Screaming Jets), Alex Raunjak (Electric Mary, Dirt River Radio) and Don Giovinazzo (The Mighty Kings). The track climaxes with a group singalong courtesy of members of The Naysayers, Shewolf, Figures, Cicadastone and many more before ripping into a beautifully chaotic six-way drum-off at the end featuring some of Melbourne’s finest beat-makers including Ricki Rae (Sonic Citizen, ex-Taxiride), Paul

“Spyda” Marret (Electric Mary), Jarrod Medwin (Massive), Josie O’Toole (Tequila Mockingbyrd), Dayne Lawless and Venom.
Turn! Turn! Turn! just got turned upside down and inside out and brought into the 21st century with an almighty bang, and all for a great cause.

The track is due for release November 3rd via all the usual digital platforms (itunes, Spotify, googleplay etc.), aswell as via Pozible, where supporters can pledge towards the cause and receive rewards such as a Limited Edition Vinyl and a compilation CD featuring the bands involved in the track.

Tell a mate (or seven), spread the word!

Click HERE to make a donation via Pozible or purchase a limited edition vinyl, compilation CD featuring bands involved in the project or t-shirt to support the cause
More information available at http://www.oneinseven.com.au/