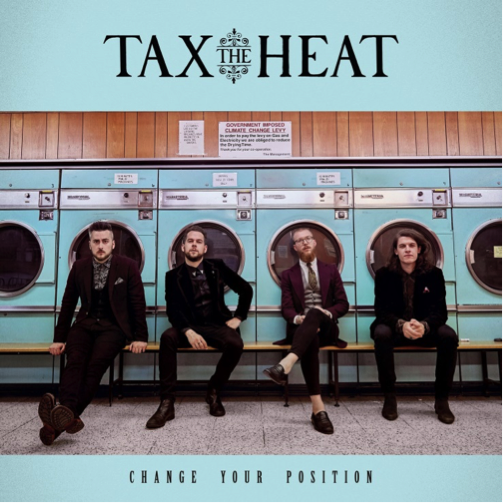 Nuclear Blast Entertainment are pleased to announce the release of the new album from Tax The Heat, “Change Your Position”, on 9th March 2018. The album will be available as CD, Digital, Limited Edition Gatefold Vinyl and Limited Edition Light Blue Vinyl.

“Change Your Position” is the follow up to the 2016 critically-acclaimed debut album “Fed To The Lions”. The new album sees the band take a huge step forward as both songwriters and performers. The band’s unique blend of fuzz-driven rock with a modern alternative twist has won them a legion of fans. The album stamps its authority right from the off with the taut “Money In the Bank” (also the first single). From the staccato stomp of “Playing With Fire” to the huge riffs of “Cut Your Chains”, from the garage rock of “On The Run” to the slow groove and instant lyrical hit of “All That Medicine”. “Change Your Position” is a lean, focused album loaded with an energy that is set to propel the band to headline status.

The driving rhythms of Jack Taylor (Drums) and Antonio Angotti (Bass) are overlaid with the powerful riffs of JP Jacyshyn (Guitars) and distinctive melodies of Alex Veale (Vocals, Guitars).

““If an album is about capturing a band or artist at a certain point, ‘Change Your Position’ might have happened at the perfect time. As a band we toured, found our sound, found our place and took inspiration from a world in utter chaos. With ‘Change Your Position’ we pushed ourselves creatively as hard as we could and it took us further into ourselves than we expected – we hope it’s apparent to the listener.” – Alex Veale

“Change Your Position” Tracklisting is as follows

LIMITED EDITION GATEFOLD VINYL
LIMITED EDITION GATEFOLD LIGHT BLUE VINYL
Side A
01. Money In The Bank
02. Change Your Position
03. Playing With Fire
04. All That Medicine
05. On The Run
06. The Last Time
Side B
01. Taking The Hit
02. My Headspace
03. We Are Consumers
04. Cut Your Chains
05. Wearing A Disguise
06. The Symphony Has Begun

From humble beginnings in 2015, Tax The Heat have become one of the most notable of new British rock acts. Multiple singles playlisted across radio in both 2015 and 2016 – taken from debut album “Fed To The Lions”. The band also honed their live craft supporting the likes Cadillac 3, Reef, The Graveltones, Black Star Riders, Masters Of Reality, Virginmarys and Thunder and festival appearances such as 2000 Trees, Download, Calling and Ramblin’ Man Fair.

Tax The Heat are currently supporting Black Star Riders across the UK as part of a fantastic bill also featuring Blues Pills and Dirty Thrills. Check out a short video snapshot of the tour here:

“Change Your Position” will be released through Nuclear Blast on 9th March 2018.