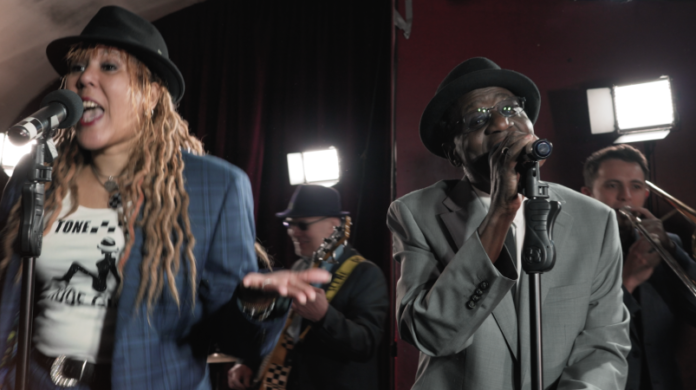 On the eve of the release of his brand-new album, From The Specials & Beyond, pioneering musical icon and leader of the Los Angeles Two-Tone/Ska movement, Neville Staple, gets the party started with the release of “Celebrate With You!” The song is the second track from his highly anticipated album, set for release worldwide on December 10, and is being accompanied by a newly shot video that finds Staple and his band, including wife and co-vocalist Sugary Staple, having a ball as they dance and perform to the uptempo track.

With From The Specials & Beyond, Staple takes us back to the very beginnings of his career, paying homage to his former band, The Specials, by revisiting two smash hits, “Ghost Town” and “Monkey Man.” In addition, Staple invited some of his early inspirations to contribute to the new album, including legendary foundation deejay Clint Eastwood and ska/rocksteady icon Derrick Morgan. Furthermore, Neol Davies of the Two-Tone revivalist outfit The Selecter and British actor/musician Gary Shall join in the fun. It’s an incredible group effort that could only be led by enormously talented Neville Staple.

Dr. Neville Staple, awarded an honorary Arden University Doctorate of Music in 2019, stated, “This has been one of my favourite albums to work on. Each song has a special and personal meaning to me. I wanted to celebrate the roots of my own music journey, with Two-Tone being at the forefront of each song, in the sound and in the lyrics. Stomping music, with sometimes serious commentary, but all presented in a fun, danceable, singalong spirit. That’s the Two-Tone way. Our way. And the special guests were amazing to work with too, especially Derrick Morgan, one of my early inspirations. With superb contributions from Sugary and the band, plus other star guests, this album is set to be a real ‘stand out’ one, that makes me proud of my career to date.”

From The Specials & Beyond will be available on all formats starting December 10. The CD version comes in a sleek digipak while the vinyl version will be pressed as a limited edition BLACK & WHITE SPLATTER pattern. Hurry and pre-order the album now before they’re gone!