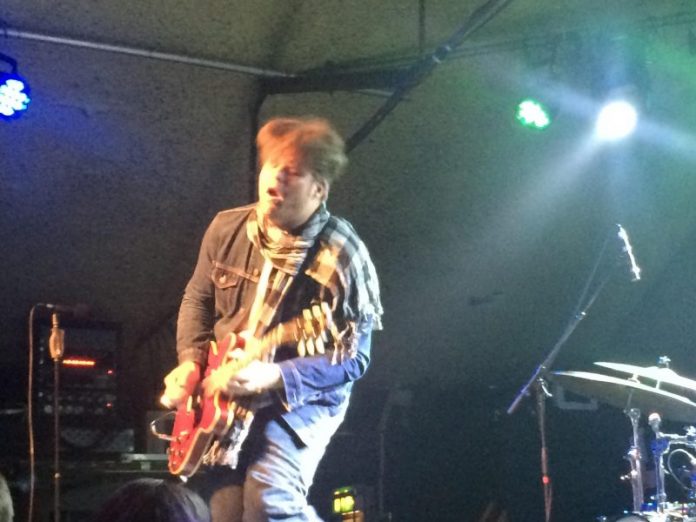 The idea for this is about simple as it gets. Take three of the best up and coming blues orientated (note: not outright blues – of which more later), two from these shores and on from the US, stick them on the same bill. Then give it rotating headliners, allow them all 45 minutes to shine. No ego’s, just great music. Sorted.

Tonight it falls to Aaron Keylock to open things, and it is interesting to chart his progress. It is easy, given the amount of touring he has done over the last few years, to forget we are dealing with a young man still without a full length record out. That album – “Cut Against The Grain” – will be released early next year, and early indications are that it is going to be very special. No longer a “blues” artist per se, instead Keylock is producing music that has more to do with Deep Purple and Cream than it does with Muddy Waters and Leadbelly. But it is work that is showing real maturity and growth. “Spin The Bottle” is a song about life on the road, like some weather-worn troubadour, “That’s Not Me” is a dalliance into Credence Clearwater Revival type classic rock, while “Down” is a piece of slide guitar boogie. In amongst all this is “Medicine Man” (which I guess we have to call “old school” Keylock) and the heads down rocking fun of “All The Right Moves”. The same epithet could be given to Aaron Keylock’s career so far – and on this evidence, he’s a long way from peaking yet.

Federal Charm are, like the man they follow on stage, more interested in blues based rock in the vein of Free,  than blues itself. It doesn’t matter how you arrive at it, though, a killer song is a killer song and Federal Charm have bucketloads of the things. Their last record “Across The Divide” was a mighty thing, as “Hercules” proves. Frontman Nick Bowden is possessed with an easy going personality, and even their slower numbers like the sorrowful “These Four Walls” are delivered with a smile of a four piece who loves being onstage. Their cover – Tom Petty’s “I Should Have Known” – isn’t what you might have thought they’d do, but they make it their own.  The last two songs in the set show both their sides expertly. “Give Me Something” (“the drinking song” jokes Bowden) is a boogie, and “Silhouette” is a big, timeless rock n roll song. Federal Charm always impress, tonight is no different.

Nashville, Tennessee’s Simo are tonight’s closing band, and the trio who take their name from their leader JD arrive here with rave reviews for the jaw-dropping technical ability. It is easy to see why, too, given that JD is very obviously an extremely gifted player, but there’s a moment during “It’s Alright” where he moves away from the microphone, and sings to the crowd for a few seconds like hes busking on the street. It shows a man with a tremendous versatility. The song he plays after this, “Return” is as big, bold and brash as the rest of the set, and dazzling dexterity is their stock in trade. “Shine” takes us down a funkier, jazz like avenue, and the closing I’d Rather Die In Vain”  – a key track on their 2016 “Let Love Show The Way” album – is little short a sensory overload, replete with guitar and drum solos,  bands on their first full tour of the UK and with just a 45 minute set, aren’t supposed to do this. No one told Simo and no one gave them a rulebook, and its temping to think we might be watching the next great jam band here.

The other week MV saw American producer Joe Henry play a solo slot. During it, he talked about the blues providing a handy framework for music, so that whatever you did within that structure would remain familiar. Those words rang true this evening as the three protagonists all did their own thing with the genre, but it all unmistakably was rooted in the blues. All three are going places too, and who knows, just like the now legendary Joe B0namassa show in Poole over a decade ago, this tour might be seen as an “I Was There” moment.