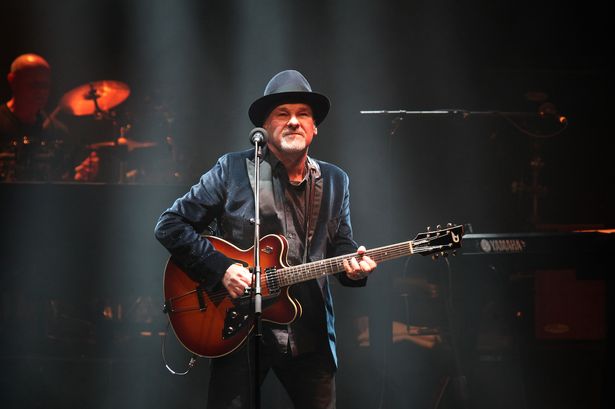 Garry goes to see the voice in opulent surroundings

When you combine the wonderful surroundings of the Birmingham Symphony Hall with one of the UK’s finest singer songwriters in Paul Carrack…..you’ve got yourself a pretty good Saturday night out.
A near as damn it capacity crowd of all ages including former Birmingham City hero Trevor Francis and League Championship winning manager Howard Wilkinson (both also with strong ties to Sheffield Wednesday, who Mr Carrack is still a season ticket holder) were treated to just under two hours of quality musicianship…..Paul Carrack has assembled a band of superbly talented minstrels over the years….and these guys on stage are that tight that they should be sponsored by 70s food storage giants Tupperware.
Across the evening we were treated to a selection of new tracks from Carrack’s new album ‘Soul Shadows’ such as ‘Sleep On It’ & ‘Bet Your Life’ as well as tracks from his splendid back catalogue with bands such as Ace, Squeeze and Mike & The Mechanics…..but one of the main highlights was the extended version of ‘time waits for no one’ which gave the members of the band a chance to really open up and show their talents.
Paul Carrack’s solo material may not have troubled the charts much over the years but nevertheless he has a catalogue of truly great tracks which were lapped up by a very appreciative crowd…..you mix these tracks alongside classics such as ‘How Long’ from Ace, ‘Tempted’ by Squeeze and ‘The Living Years’ ‘Another Cup of Coffee’ & ‘Over My Shoulder’ from Mike & The Mechanics and you have one hell of a setlist.
It’s great to see such a nice guy as Paul Carrack playing to packed venues like the Symphony Hall but later in the year you can also see him play a more cosy venue in the Bilston Robin…..he just loves playing and it’s credit to him that he mixes up the size and style of venue on his tours to make sure that his fans get a chance to see him and his band up close & personal or from 50 yards away in a comfy seat.
Previous article
REVIEW: GIN LADY – Call The Nation (2016)
Next article
Breaking Bands Gets Closer