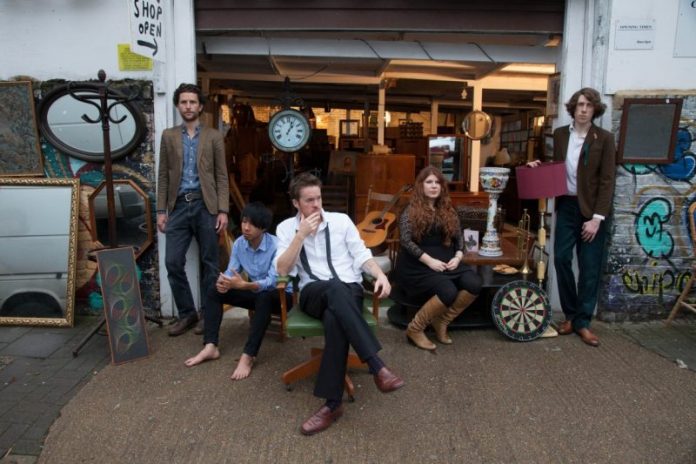 ‘Flowers’ is the brand new single from acclaimed folk quintet, Patch & The Giant, taken from their debut album, ‘All That We Had, We Stole’ due out early next year.

“Flowers is a song about the yearning for one’s home, the feeling of detachment when you’re far away and the overall place it continues to occupy in all of us, no matter where we are.” – Patch & The Giant

The new single showcases Patch & The Giant’s eclectic take on folk music, which effectively harnesses elements of indie, rock, blues and jazz and fuses them with inviting story-telling courtesy of lead singer Luke Owen’s rich and tender vocals. Add to that a unique instrumentation, built on violin, accordion, horn, cello, piano, banjo, electric guitar and mandolin, alongside acoustic guitar, bass and drums and you’ve got yourself an impressive sound.

‘Flowers’ is their first official single from their upcoming album, ‘All That We Had, We Stole’, due for release on 10th February 2017 – a polished and accomplished debut produced by Nick Trepka, whose producer credits include Emmy The Great and Mercury Prize Winner Speech Debelle.  “As soon as we began talking to Nick about working together, he was adamant that we should record as much as we possibly could live” says the band. “So we locked ourselves into the studio and didn’t leave until we had an album. It’s quite a varied mix and we feel it says a lot about who we are, who we’ve been so far and who we’re becoming.”

Patch & The Giant are a dynamic troupe of musicians who have fast become a genuine force within the UK alt-folk scene, since releasing their debut EP The Boatswain’s Refuge on Folkroom Records in 2013 (produced by BBC Folk Award winner Ben Walker).  National radio support has come from BBC Radio 2, BBC Radio 6 and Amazing Radio, they’ve had loyal support from the blog community and have recorded live sessions for the BBC’s legendary ‘Whispering’ Bob Harris, Bandstand Busking, Songs From The Shed, Sofar Sounds and many more.

With all eyes now on the new single and debut album, the band will also be announcing a headline tour for 2017. Stay tuned for further news on this and for the ‘Flowers’ video – due very soon.