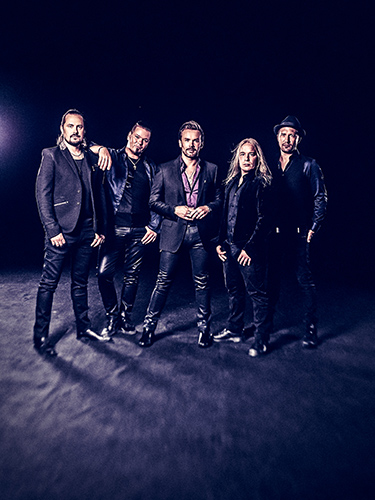 BROTHER FIRETRIBE – the melodic rock maestros from Finland featuring Nightwish guitarist Emppu Vuorinen – have released their new single, ‘Taste Of A Champion’, via Spinefarm Records; this is the first new music unveiled by the five-piece since their 2014 album, ‘Diamond In The Firepit’ – the BFT catalogue is completed by the ‘Breakout’ album (2006), the ‘Heart Full Of Fire’ album (2008, now gold in Finland) and the ‘Live At Apollo’ DVD (2010), also Spinefarmreleases in the UK.

Produced by the band themselves with mixing handled by Mikko Karmila (who has previously worked with both Nightwish & Children Of Bodom), ‘Taste Of A Champion’ sees the musicians delivering an epic slice of hook-laden rock glory – an exciting first taste (and view – a video is currently being worked on) of the next / fourth studio album, title tbc, set for release on Spinefarm in March 2017.

“We’re absolutely thrilled about what’s on the horizon for the band. We’re so confident about this new album that we’re already calling 2017 ‘The Year Of The Tribe’! ‘Taste Of A Champion’ kicks things off, and it says a lot about the direction of the new record. We can’t wait to finish it and let the magic start to happen!”