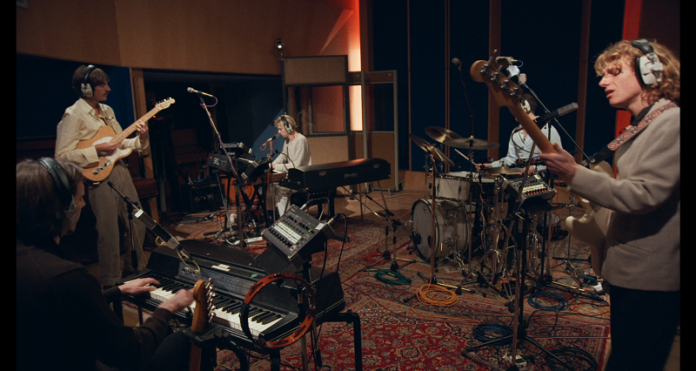 The session sees the 5-piece perform three songs from their latest album ‘Day/Night’: ‘Comingback’, ‘Famous’ and ‘LordHenry’. The video is interspersed with footage shot by band member Louie, shot on a handheld film camera.

As a band who have always shone in a live setting thanks to their peerless musicianship, this live session is a rare opportunity to see Parcels close up – performing in the studio – playing in the round. The session was recorded while the band were on tour, and as Louie from the band says:

“We recorded these songs at Abbey Road Studios the day after our first live concert in nearly two years. The experience of playing these new songs on stage was an intense outburst of energy, reciprocated by more people in one room than any of us had experienced in a long time, so I think most of us were in a bit of a surreal state of mind. The studios themselves felt cozy to me. I enjoyed seeing the classical players drifting through the historic halls with the familiarity of anyone’s daily place of work. I was handed a camera to shoot some behind the scenes footage throughout the day and attempted to re-create a tracking shot I’d once seen of Pink Floyd having lunch in the cafeteria. No one was very enthusiastic and I was then told that the cafeteria was a private space with no filming allowed. Having seen first hand the deep importance of a purposefully quiet lunch during studio days, I was impressed and obeyed respectfully. We also met Nile Rogers for a short moment which was also very surreal. Thank you for having us, Abbey Road!”

Playing live, Parcels are a force to be reckoned with. “A dextrous show of live prowess”, NME remarked in their 5-star review of Parcels live at Islington Assembly Hall late last year: “you simply have to see this band live.” After their European shows the band hit the road in the USA, and latterly Mexico, where they played their biggest show to date: a sold-out 8,000-capacity venue in Mexico City.

Currently on tour performing at festivals across Europe, Parcels are set to return to the UK in September, playing a run of sold out shows  including London’s Brixton Academy. Full dates below.

Parcels are a 5-piece band based in Paris. They are: guitarist Jules Crommelin, keyboardist Louie Swain, keyboardist/guitarist Patrick Hetherington, bassist Noah Hill and drummer Anatole ‘Toto’ Serret. Their recent sophomore album ‘Day/Night’ was met with widespread critical acclaim upon its release late last year, with Rolling Stone UK dubbing it “a brilliantly accomplished, genre-spanning record” and NME remarking: “this daring album sets yet another high bar for this band.” Loud & Quiet Magazine dubbed the album “ambitious and opulent”, with Gigwise proclaiming it as “a career-defining record” in their 9/10 review.