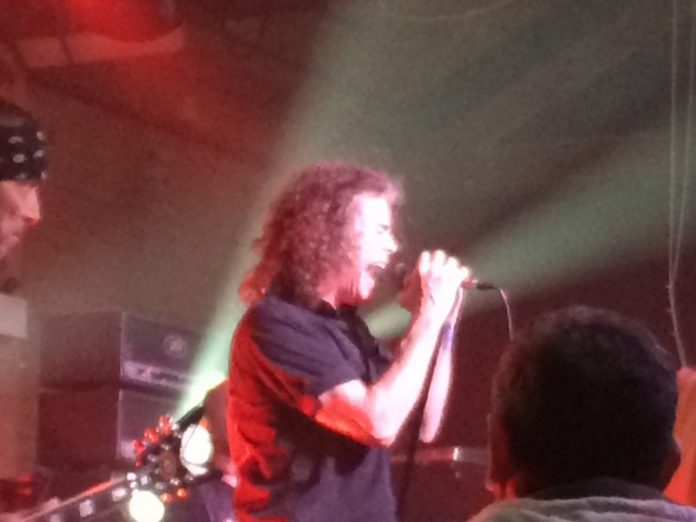 One Machine have had better days. Their van has broken and as singer Chris Hawkins puts it, they’ve “had to spunk a shit load of money on a new one”. On top of this, Hawkins has a problem with his voice (“probably too many truckers dicks….it pays for fuel” he offers helpfully.) He and the rest of One Machine – formed by thrash veteran Steve Smyth (Testament, Nevermore, Dragonlord) channel these disappointments into an energetic and enthusiastic set that makes for what it lacks in subtlety by sheer hard work and ebullience. Happily kicking it old school, album title track “The Final Cull” thunders and the closing “Screaming For Light” does exactly what you’d want it to. With that they are off to the merch booth – new vans don’t pay for themselves after all.

After the rather knockabout feel of the openers, Vader are altogether more serious proposition. An appreciable notch up in heaviness too, songs like “Born In Flames” – which features some incredible drumming from James Stewart – are rendered all the more threatening by the gutteral roar of Piotr Wiwczarek. The slightly incongruous sight of tikka tape falling from the ceiling (MV assumes a leftover from the nightclub that was here at the weekend) greets “Reborn In Flames”. It’s fitting testament to the power of the music that it can shake the foundations in such a way. More complex than a straight ahead death metal mix, “Triumph Of Death” from their most recent album, locks itself into a mighty groove, and “Come And See My Sacrifice” is a 100 mile an hour attack even before its warmed up. There’s a trip right back to the start and “Dark Age” from 1992 still sounds mighty, and proves that, even as they approach their 25th anniversary, Vader have lost none of the power and fury they’ve always possessed.

“My heart’s beating faster, I must be on English soil” screams Overkill’s ringmaster Bobby “Blitz” Ellsworth at the end of “Rotten To The Core” the bands second song here. He’s responding to the chant that has just risen to the air: “Overkill, Overkill”. Such things mean a lot when you’re thousands of miles from home.

The New Jersey band, rather like Slayer and Exodus, haven’t watered down, they haven’t “matured” (subtext: got dull). They are thrash metal, baby. Horns up, straight up and not giving two shits for trends.

To that end, “Electric Rattlesnake” spits bile not venom, and woe betide you if you try and contain “Hammerhead”. It’ll win, not you.

A band that only knows one way to play: that’s full on, fast and loud. Even their most metal moments such as “Feel The Fire” seem positively dangerous. Actually there’s the hint of the flick knife about them at all times, and that only adds to the charged up nature of things, even the piano opening to “Bare Bones’ seems to bring with it a sense of foreboding – with guitarist DD Verni taking his shirt off to become a lean, mean riffing machine for good measure.

A huge, menacing hook ushers in “Horrorscope” – perhaps the slowest, most deliberate thing here, although this is balanced out by a snotty “Thanx For Nothing” which follows immediately.

Like other great bands, they’ve got their own eponymous song and “Overkill” is delivered with a passion, and “Ironbound” does something mighty and becomes a real highlight in the process. That’s the last song in the set, but the punk rock infused “Elimination” acts as a boot to somewhere painful in the encore, and just in case you weren’t sure, “Fuck You”, a cover of The Subhumans song, brings things to a violent end.

After presiding over an unrelenting, unremitting and unforgiving 100 minutes, final word goes to Ellsworth (he had explained that he was in charge, after all). “35 years we’ve been doing this and it’s our first time in the home of Black Sabbath” he says. Birmingham is glad they finally made it.

Previous article
Hang The Bastard Hang It Up
Next article
Featured Band: D.A.M