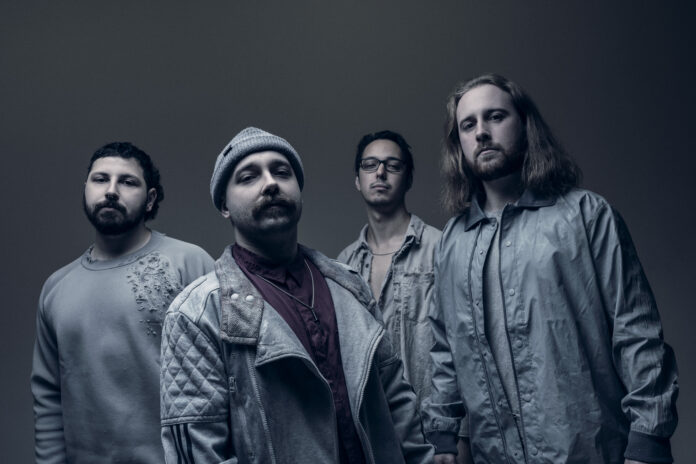 Welcome to a brand-new chapter of lyrical lore, flamboyant characters, and plot twists that will leave listeners clutching their chests with glee. Welcome to a new era of The Gloom Cinematic Universe. Welcome to Trinity.

Out today via SharpTone Records, cinema-core masterminds The Gloom In The Corner have officially released their sophomore record, a thirteen-track epic narrative designed to impress with both its sonic prowess and storytelling ability.

Featuring previously released singles ‘Ronin‘, ‘From Heaven To Hell‘, ‘New Order‘, and ‘Pandora’s Box‘, Trinity completes the unnerving tale of three previously deceased characters’ bloody journey through the underworld, and draws on an impressive cast of guests (including members of Fit For A King, Fit For An Autopsy, Cane Hill, Crystal Lake, Red Handed Denial, Left To Suffer, and more) to help bring the anti-heroes and their story to life.

On the overarching plot of the record, vocalist Mikey Arthur reveals:

“The story of ‘Trinity’ follows three characters from our previous arc who have died and gone to our story’s Hell dimension; The Rabbit Hole. With the guidance of a shadowy and ominous figure known only as The Narrator, the Unholy Trinity begin a Dante-inspired journey deeper into the Rabbit Hole to recover three mythical objects that will help them return to the realm of the living, descending not only into the depths of Hell, but into the darkest corners of their characters.”

To celebrate the arrival of the new album, The Gloom In The Corner has also shared an exciting new live-action music video for ‘Behemoth‘. An aggressive rap-metal infused track, the group continue to surprise with a stylistic switch-up as they dive into a high-intensity fight scene between the ruler of Hell and the central cast of the record.

Explaining the lore and deeper meaning behind the song, the band elaborate:

“‘Behemoth’, from a story stand-point, follows our Unholy Trinity as they venture to claim the last item required to start their ritual to return to the living; the Heart of the Ruler. They venture into the Tower of Babel to take on Asmodeus, the current Ruler of the Realm, being faced with a horde of demons and the Ruler himself, who eggs on the violence from his throne. The Ronin spares no time launching himself at Asmodeus, and the two begin a close fight while Rachel and Clara battle the horde around them.

From a real world perspective, ‘Behemoth’ tackles the topic of betrayal and having to be torn between two parties, effectively playing middle-man, and the mental duress such an act can entail, reflective of how the Ronin behaves when chaperoning Clara and Rachel through the
descent into Hell.”