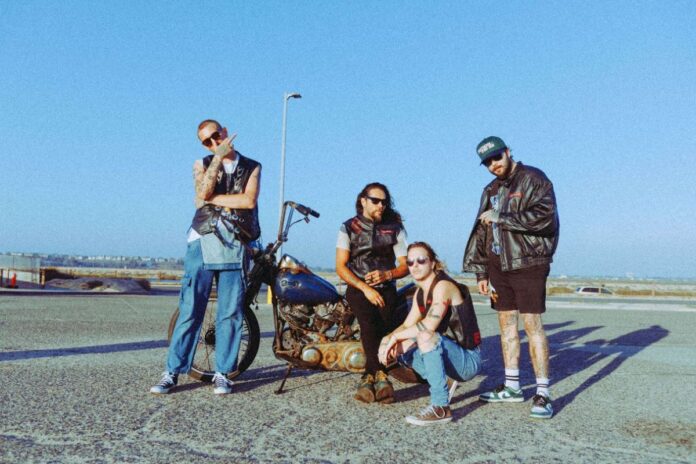 The Hunna have today (October 28th) released their brand new self-titled album via Believe, available to listen/purchase here. Marking the release they have revealed the video for single ‘Fugazi’, which features a cameo from The Hills star Justin Bobby who the band namecheck in the song as frontman Ryan sings, “Oooh, I feel like Justin Bobby, Riding out on my Harley, She’s super bad like Miley, I’m done with the Fugazi.”

Justin Bobby channels his classic bad boy persona in the video for the explosive grunge anthem. He rides his Harley through the LA desert while the Hertfordshire rock band perform, before they all run riot in bars and trash motel rooms in true rock ‘n’ roll style.

Regarding the single Ryan says, “‘Fugazi’ is about being locked up and held down for too long until you say, “Screw it, for one night we’re just going to go balls to the wall, have the best time ever and not care about the repercussions.”

The new album has been produced by the legendary Gil Norton (Pixies, Foo Fighters, Jimmy Eat World) and seethes with colossal riffs, irresistible melodies and memorable lyrics as demonstrated in the further singles ‘Trash’, ‘Apologies’ and ‘Untouched Hearts’.

Live, The Hunna have always been one of the most exciting bands on the circuit, with an insanely devoted fanbase guaranteed to turn every gig and festival appearance into an unmissable event. This has been found on the band’s current sold out UK headline tour, where they are playing the album in full to a rabid reaction from fans alongside a set of huge hits spanning their gold-certified back catalogue.

The band are also playing a number of intimate acoustic shows in November, with tickets selling quickly and prompting new additional shows to be added. The Hunna will also be touring Europe next year on a co-headline run with You Me At Six throughout February and March. The Hunna’s full tour dates can be found below:

The Hunna is available now digitally and in an array of physical formats including vinyl / CD / cassette available here, as well as special fan bundles and exclusive signed merchandise via store.thehunnaofficial.com