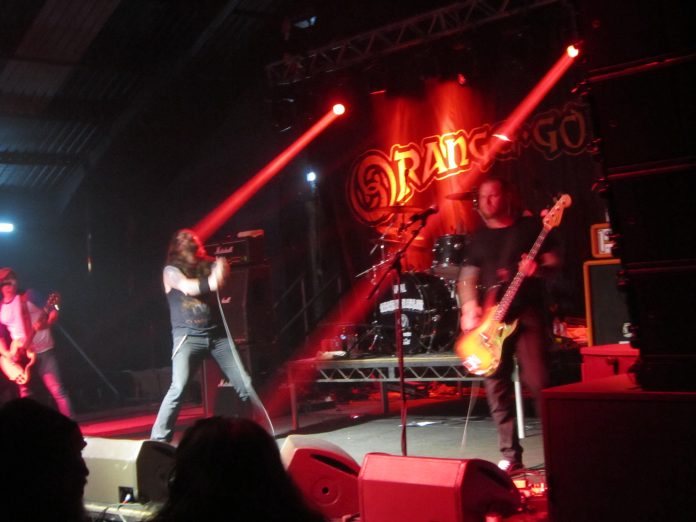 Right at the end of the gig tonight – in possibly the coldest indoor venue on the planet –  Orange Goblin’s man mountain of a singer, Ben Ward, hits the nail on the head.

“We know fake people when we see them,” he roars (Ward, it seems to me, is the type of bloke that roars everything) ”but we know who’s real….”

Orange Goblin should do to. Because for 22 years (and can anybody really believe its been 22 years since their debut?!) Orange Goblin have been as downright real as heavy metal gets.

They don’t have frills, they don’t have airs and graces, they just have great songs – by the bucketful – great riffs – by the lorryload – and Ward’s unrivalled ability to own any stage he’s ever been on.

Having not seen them for a while, I had forgotten their ability to surprise. “Turbo Effalunt (Elephant)” probably wasn’t the way I was expecting them to start, but with the wonderful “The Wolf Bites Back” album still relatively fresh, it is good to hear some of the newer stuff in the set too. “Sons Of Salem” sounds righteous and has fitted straight in. It is followed with “The Filthy And The Few” and to not like that song is to get life wrong, frankly.

Even if that first album was from the last century, then “Saruman’s Wish” still sounds like it came out yesterday – and these boys must have played it millions of times too, given that they’ve been here since the start. Unusual, that, in a group, but then OG have always felt more like a biker gang, them and their audience against the world (or at least the mainstream).

Whenever they play, they always seem to be able to do career-spanning sets better than most, so for every new one – the title track of last year’s album sounds superb – there’s a copper-bottomed belter from the archives like “Some You Win, Some You Lose” which is about as catchy as catchy gets.

The set just pummels. Not for these four to say things like “we’re gonna slow down a bit now” or anything of the type, instead “Blue Snow”, “Quincy The Pigboy” and the magnificent “Scorpionica” comes and go. But they come and go with hometown lad Chris Turner thundering the drums, Martyn Millard almost threatening his bass to perform how he wants it, and Joe Hoare’s calmness betraying his skill on the lead.

As if to back up his words about fakers, there’s no encore. Just “Devil’s Whip” – possibly the most heavy metal sounding song title ever and so greasy you best lick your fingers after, before Ward takes a trip down to see his people in the front row on “They Come Back (Harvest Of Skulls)” – during which he manages to start a circle pit.

Then comes, as it always seems to, “Red Sky Rising” at the end. At its end, Ward’s final roar is simple. “Heavy metal forever!” and “We’ve been Orange fucking Goblin, baby.” He has a habit of saying the simple thing and getting them spot on.