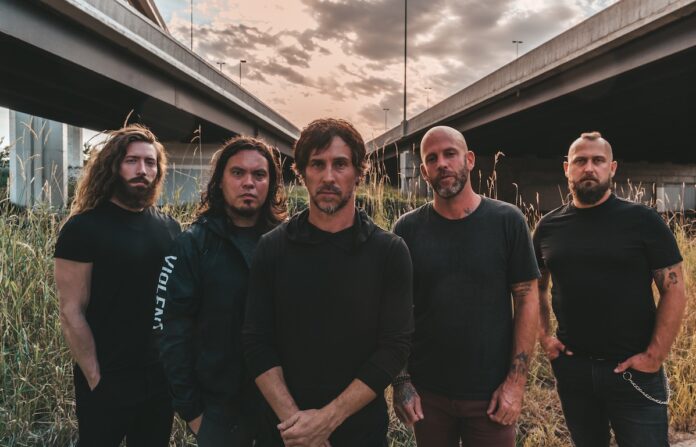 Knoxville, Tennessee alt-rockers 10 Years are thrilled to reveal the video for their brand-new song, “The Optimist,” today as they begin their UK and European tour with Three Days Grace in Cardiff, Wales. “The Optimist” is released via Mascot Records/Mascot Label Group. You can watch the video here.

Cardiff is the first of a 21-date tour with Canadian rockers Three Days Grace, which will see them play shows in the UK, Germany, Switzerland, Italy, Austria, Hungary, Romania, Czech Republic, Poland, Luxembourg, Belgium, and The Netherlands. Tickets are available from here.

The new song is a three-minute hook-fest of crunching riffs and earworm chorus with the 10 Years DNA running through it. The video shows their life on the road, from euphoric club shows and enormous festival stages to the band hanging around on off days, to give you a behind-the-curtain view to life on the road.

Talking about the track, Brian Vodinh says. “The Optimist riff first began as an improvised jam in-between songs at a live show. Sometimes the band would randomly improvise on stage, and the song’s main riff happened by a happy accident one night, and then we decided to turn that little moment into a proper song. The lyrics are about how life can beat you down, but you must keep searching for ways to push on and not let it make you too cynical. It’s about the fight to keep a good perspective on things.”

The tour will be the first time the band have played in Europe since 2018, and it gives fans the chance to hear songs from their most recent studio album, 2020s Violent Allies, live for the first time. Written in the Woodland Hills in Los Angeles, the band recorded for five weeks with GRAMMY® Award-winning producer Howard Benson [My Chemical Romance, Halestorm, Papa Roach]. Violent Allies has amassed over 30 million streams, with the lead single “The Shift” smashing through the 10m Spotify stream barrier alone. Check out the band’s live energy in the official video for the song here.

Talking about the upcoming tour, Vodinh says, “Three Days Grace has always been a band that we have admired. Being able to not only share the stage with them but to have the opportunity to play in front of the amazing, music-hungry fans of Europe again is a dream come true for us. The fans in Europe are so passionate, and they dig deeper than the surface with our music which is always something we have loved about them.”

Their wall of sound hooks and high-octane live shows have seen them build a phenomenally loyal US following. They’ve sold out countless headline shows and toured with giants such as Korn, Deftones, Stone Temple Pilots and Stone Sour to Five Finger Death Punch, A Perfect Circle and Linkin Park.

They will be playing the monstrous fan-favourites and hits such as; the Gold-certified Billboard Alternative #1 smash anthem “Wasteland,” the Top 5 Billboard US Mainstream Rock Songs Chart hit “Novacaine”,  as well as  songs from Violent Allies such as “The Unknown”, and “The Shift,” along with countless others from their back-catalogue of Top 30 Billboard albums.

10 Years have put in the hard miles and are built for life on the road, and Europe will get the chance to experience it for the first time in a long-time. They’re going to bring the energy, and it will feel massive.

The band are currently working on new material for 2023.

Tickets are available from here

Previous article
US AND THEM
Next article
EGG-XELLENT