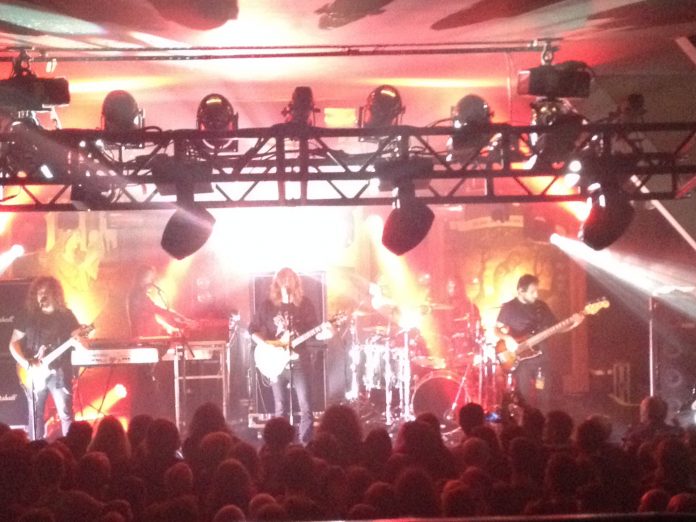 Are they prog? Are the metal? Are they One Direction fans? Opeth bring the surprises to Birmingham

That there’s sold-out signs up at The Institute tonight, is on the face of it, pretty good business. Thing is, though, it’s a bit of a never-let-the-facts-get-in-the-way-of-the-truth type of sold-out. This show was meant to be upstairs in the main room but was moved down to the much smaller library just days ago, proving perhaps that the metal world is still to fully embrace Opeth’s move into prog.

In the context of what perhaps must still be called the “new” Opeth, Alcest are the perfect support band. Their records are an interesting sonic journey – one which in a similar vein to the main act has seen the band transformed from Black Metal to the dark atmospherics of today. Perhaps being totally honest they remain a band that are appreciated via your headphones, where their soundscapes wash over listener gloriously. That said when Alcest lock into a groove, as they do on “Percées de lumière” they are a joyous proposition. They close with a suitably epic “Délivrance” and for 45 minutes here they provided a very pleasing diversion.

Conventional wisdom has it that one minute Opeth were a death metal band, the next they were a prog behemoth. The truth is somewhat different. Mikael Åkerfeldt and his (many) mates have, over the years, flirted with all sorts of different styles, they were never your conventional metal monsters. That’s what made them cool in the first place.

What is true is that “Pale Communion,” their latest release, has precious little of anything to do with metal. Indeed, Åkerfeldt has spoken of not understanding the genre anymore, although that might be poetic license given that he talks about buying Nazareth albums this afternoon. It’s not a bad record – far from it – but watching them kick off with it’s opening track “Eternal Rains Will Come,” with it’s liberal use of keyboard and understated opening section, it’s abundantly and immediately clear that even for Opeth this is one giant leap.

Another track from “…..Communion” is aired straight after, “The Cusp Of Eternity,” injects more urgency and features a brilliant guitar solo from Fredrik Åkesson. But anyone who thought it was going to be prog all the way is in for a shock. Throughout the rest of a lengthy old night, only one more new song is played in “Elysian Woes.” Elsewhere it’s a touch more career-spanning than might have been expected.

We go back to “Blackwater Park” for “Bleak” a superb mixture of guttural vocal and swirling sound, this is Opeth at their best.

As always with these Swedes, though, they are more laid back and a little more cheerful than you might expect, so when Åkesson plays the wrong opening to “The Moor” it’s met with a giggle and a shrug. The sheer complexity of tracks on view here perhaps makes the odd mistake allowable. The fact Åkerfeldt admits to taking his daughter to see One Direction in Stockholm perhaps takes more forgiving…..

There is plenty to commend this set. “Devils Orchard” which delivers it’s key line of “god is dead” in such a cheery way as to almost be missed, sounds superb, while “April Ethereal” is as close as we get to Black Metal, “Lotus Eater” is a bleak masterclass and the encore of “Deliverance” is incredible in sheer scope.

There is no other band quite like Opeth. The gig might have sold-out. The band playing it for over two hours tonight never has. They have resolutely ploughed their particular musical furrow in whatever direction they – and no one else – wanted it to go. They give the air of being a band who genuinely would rather not make music at all than make music they didn’t believe in – and whether you like it all or not you have to admire them for that.