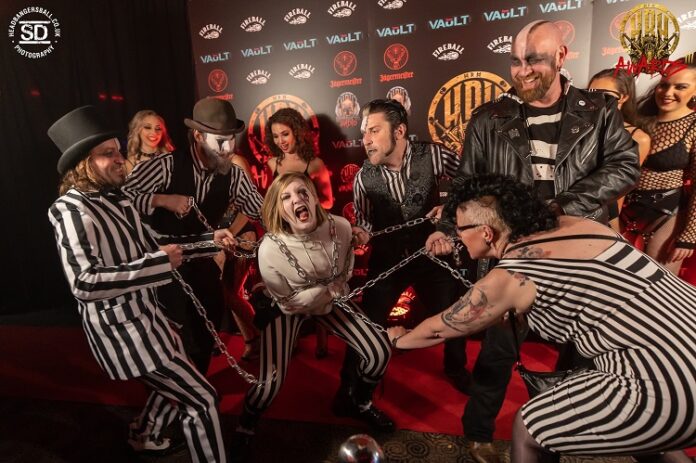 Lancashire inmates Ward XVI are finally touring their mighty monstrous new album Metamorphosis – following a roaring response to their festival appearances in 2021, including Bloodstock and Hard Rock Hell 14, as well as a packed out album launch at Manchester Academy!

Now YOU can join the clan for a night featuring a full theatric show to make it an incredible experience in which we will be playing Metamorphosis in its entirety!

Ward XVI will be travelling around the UK touring their critically acclaimed Metamorphosis release in its entirety from February 2022, including an appearance at Hammerfest.

Following their monstrous theatrical appearance at this year’s Bloodstock on The Sophie Lancaster Stage, Ward XVI have delighted us with this mighty announcement of a digital anniversary edition of their extremely popular album release Metamorphosis – available far and wide from September 24th, 2021.

In September 2020, The second chapter of Psychoberrie’s confessional ‘Metamorphosis’, was unleashed. The album received critical acclaim from fans and media alike and claimed a spot in many top 10 album polls of 2020. This was followed up in December 2020 with the EP ‘Unplugged and Sedated‘, as Ward XVI confronted the effects of a Covid-19 ravaged year and responded to the overwhelming demand of their inmates following live acoustic versions of Metamorphosis songs posted online.

With appearances at Rockin’ The Bowl and Hammerfest 13 lined up for 2022, these inmates are ready to unleash their alter-egos and mischievous characters to audiences far and wide….you have been warned.