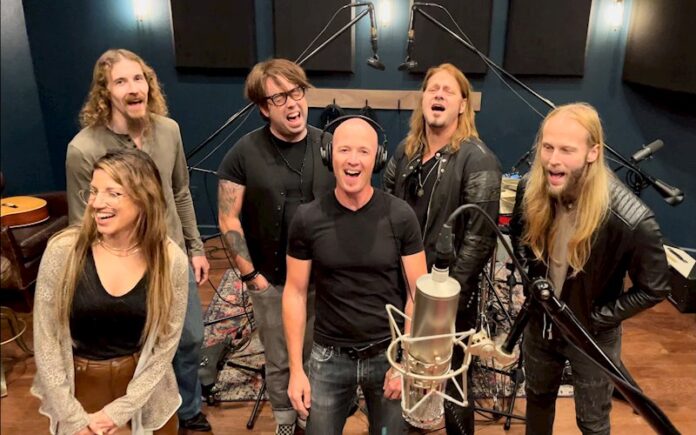 LA Musicians NO SAVIORS release their fabulous video for new single ‘This Is Not America’, out now.

Check out the new video for ‘This Is Not America’ HERE.

Dicki states: “Many people came together to make the video possible. All of them have given their time and expertise freely, because they believe in the message of the song – that is the greatest feeling!”   Watch on Rumble: https://rumble.com/vsl6rw-this-is-not-america.html

New International Band Launches Song Against Division.
Six Los Angeles-based professional musicians from four different countries are releasing the song “This Is Not America” on Monday, November 29th on all streaming platforms.

The song against division and for unity was written by lead singer and multi-instrumentalist Dicki Fliszar, who was “not hearing what needed to be said” in music. “We live in a time when the powers that be in politics and in the mainstream media are actively engaged in separating us instead of trying to bring us together,” Fliszar states.
“We are all so cautious these days, it was hard for me to ask my friends to participate, even though I know some of them very well for many years.” After finding the heart to reach out, surprisingly every one of his friends agreed to take part, even though the chorus repeats the somewhat controversial line “I will not comply”.
“We are being told not to trust and to feel scared of each other when really the way forward is connection.” To evoke that connection and in a show of faith, Fliszar invited his friends to a recording studio without ever having made music together. “Some of us had never even met each other before,” acknowledges Fliszar.

Having said that, the musicians of the new project are all professionals, having performed with members of Iron Maiden and Van Halen in their touring bands, for example. “I had a good feeling of being on the right path as everything came together vey fast and organically and also because these guys are all pros,” mentions Fliszar.

“The song physically brought together three American musicians and three musicians from other countries that came to America because of its freedom” says Fliszar. “I hope our song can also bring others together, wherever they might be.”

“Our song is called “This Is Not America”, because the timeless ideals of freedom and liberty are not really being honored right now here and in many other parts of the world. I believe we can find a way to a new, more open and free society based on those American core ideals – not only here in the US, but also everywhere else on our planet. We are in this together.“