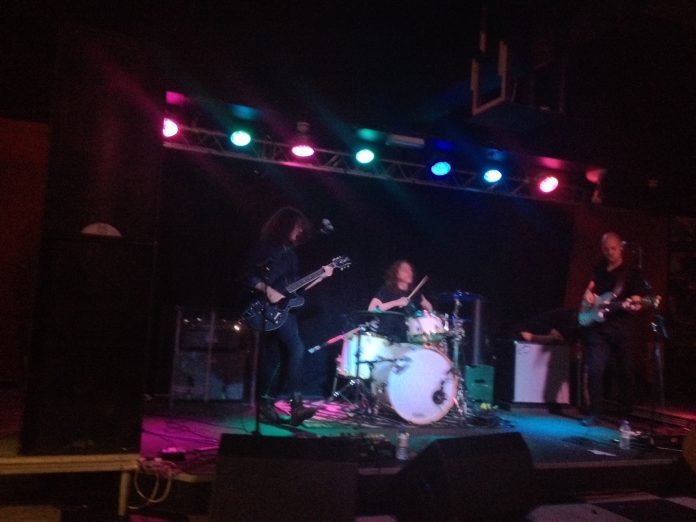 Summertime Blues as Oli and the boys hit the Midlands, with some surprises in store

If a week is a long time in politics then by christ it’s even longer in the blues.

Last weekend, y’see, Oli Brown was opening for the mighty Slash in Europe, tonight it’s back to the day job. Which means the downstairs bar at Leamington’s Assembly in front of about 70 punters who have left behind whatever Beer Garden the rest of the venerable Spa town is in.

Before that, though, there’s the small matter of the support for the evening. Screeching, stomping bluesy rock n roll is the order of proceedings for Get Loose. The three-piece are very adept at it too, whether they are running through their own material, like the uptempo “Forgive Me,” the darker “Harm’s Way,” ripping more straight ahead blues like the duo of Muddy Waters songs they play, “Black Night” and “King Me,” they do a fine job. Before they end their entertaining set, they casually knock out a track called “Good Looking Woman” which neatly ties all the loose ends and once they warm up, Get Loose are ready to stretch out.

The phrase “back to the day job” is apt for Oli Brown. And this is very much back to where it all began. Those Slash shows were as Raven Eye, the rock band he also fronts. He made his name, though, as a blues guitarist of immense promise, indeed when MV last clapped eyes on him it was supporting Walter Trout. At that show back in the last decade, he was a fresh faced kid. In the intervening years, Brown has grown up. He’s become a bluesman you might say.

One thing that hasn’t changed is his ability to play the guitar. His work here is little short of stunning. And the versatility of his skills is shown on “Speechless” from his second record which shimmers, before he delivers a masterclass.

“Evil Soul” just about restrains itself, while “The Devil In Me” plunges us into some real darkness and “Love’s Gone Cold” is a proper ol’ tearjerker.

Almost as if to prove he can do just about anything with a guitar, his amp gives up in the acoustic section, but he manages to turn this into something wonderful and plays with no amplification at all. This superb busking section makes for captivating viewing. In particular “All In My Head,” complete with heartfelt lyrics acting as a window into personal hell – with Brown joking that “the girl did a number on me” benefits from this approach, and the equally raw “Wasting Love” is not far from being the highlight of the show.

The busking theme continues when the rest of the trio re-appears for a knockout “Train Ticket” which is mournfully excellent.

The RavenEye project given its head with the groovy “Hey, Hey Yeah” becoming a singalong, but elsewhere it’s blues all the way. A couple sound like John Butler Trio at their funkiest, but “You Can Only Blame Yourself” Thumps and thuds, and as the show goes on, Brown becomes even more relaxed and the range he shows is jaw-dropping.

“Stone Cold (Roxanne)” which acts as a main set closer here, is ebullient fun and everything you want from bar room blues. There’s an encore of “Black Betty” just for kicks to wrap up a superb and lengthy set – including a drum solo from Kev Hickman, it does the job almost perfectly.

Oli Brown, whether as RavenEye or just Oli on his own, whether acoustic or plugged in, is an incredible talent. Tonight proves it.