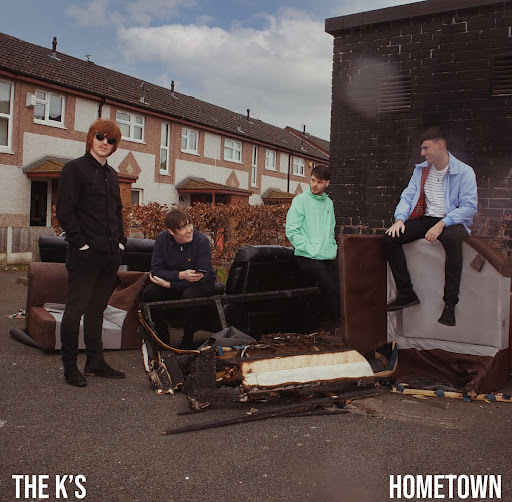 THE K’S are undoubtedly a band that know how to bring it in abundance, and we’re talking about the good times and the music! They do it in equal measure with some pretty epic results. This is a band who are, quite simply put, a bunch of four best mates, who are loving life, loving performing and loving making music together and it shows! Their high octane live performances are mesmerising with many a life-long fan having been gained at each gig they play. In summary you can’t help but love them!

They are everything that is good about rock n roll, livening up the more ordinary, humdrum beige bands that we are often subjected to in the mainstream today.

The band were initially formed in Earlestown in 2017 and consist of Jamie Boyle on Vocals/Rhythm Guitar, Ryan Breslin on Lead Guitar, Dexter Baker on Bass and Jordan Holden on Drums.

The story goes that after watching a video of The Jam performing ‘In the City’ live at The Circus, Jamie and Dexter knew in an epiphany moment what they were destined for and decided to pick up their own guitars and see what sort of music they could make for themselves. Fast forward and the band released their first single “Saravejo” in 2017 which has attained over 3 million streams on Spotify alone. Over the next couple of years, the singles “Got A Feeling” and “Glass Towns” were released and October 2019 saw the release of “Aurora” followed by the 2020 lockdown release of “Valley One” as well as the release of fan favourite “TV”. At the very end of last year the band then released their huge hit ‘Picture’

Following on from the success of ‘Picture’ we’re thrilled that THE K’S are now back with their latest single “Hometown”.

‘Hometown’ takes no prisoners, it opens up as it means to go on, fast and furious instrumentals coupled with Jamie’s infectious relatable lyricism depicting tales of debauchery in a wasted effort to beat the everyday mundane. It’ll have you bouncing around in joyful abandonment and raising  a glass in recognition and acknowledgement.

With lyrics like “He’s so easily persuaded by his need to feel sedated and the only way to get it is to empty all his wages into the pockets of the boys that he hated when he was at school….. When he was in, when he was in his Hometown, playing all of his favourite sounds in the sun… put ‘em on, put ‘em on” It’s easy to see that this song is relatable to the everyman. It’s a song for the masses to enjoy and enjoy they undoubtedly will!

‘Hometown’ is a track that showcases the band, it’s shot all the way through with a huge sense of everything The K’s – every track released by this band is unmistakably The K’s! It has the spirit and energy of raw punk, coupled with the rhythm and soul of the indie greats. You’re in a hedonistic fusion of musical delight, when just like that, it’s over leaving you breathless and begging for more!

The band’s comomorady and friendship shines throughout in their music. They bring an instant joy to everyone who hears them. They really are true saviours of rock n roll and everything that is good in music today!

Front man Jamie, has said the of the story behind the track:

“Hometown is written about normal week by week life for a lot of people our age in working class England. You work all week just to give someone else your wages at the weekend in the hopes you’ll escape real life for a while. Live like a King for a day and regret it all week and then rinse and repeat the weekend after. ‘Hometown’ captures the rollercoaster of emotions and chaos of the process as well as the fun you have doing it. The vast majority of young people in the UK will be able to relate to every line. P.S – The riff is fucking unreal too!”

‘Hometown’ was Recorded, Mixed and Produced at The Lounge In Wigan by Gareth Nuttall (who previously worked on the band’s hits ‘Saravejo’ and ‘Picture’)

The single cover artwork for ‘Hometown’ is by Kristopher Tolley