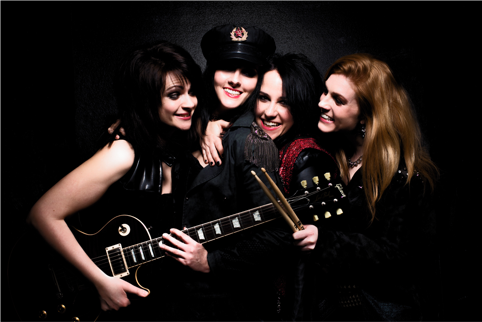 July 25, 2017
Reading time: 3 min.
Facebook
Twitter
Pinterest
WhatsApp
Linkedin
Email
Print
Telegram
Copy URL
By Andy Thorley
Summertime is here and to celebrate JOANovARC are proud to announce the release of Seeds Of Summer on August 25th.
In your face and full of energy, the vibrant Seeds Of Summer is released as a very limited edition 7″.
JOANovARC will be making a donation from the proceeds of the single to the victims of the Grenfell Tower tragedy.  “We wanted to help the victims of the Grenfell tower as this tragedy is close to home for us. We have spent many years in London performing, living and working. We would like to give something to the community that has lost so much” – JOANovARC
JOANovARC turn up the heat with their new video, so kick back and watch it here:
Upbeat and happy Seeds Of Summer is taken from their critically acclaimed debut album Ride Of Your Life released on Red Vixen Records.
Ride Of Your Life finds JOANovARC at their full creative tilt delivering hard-hitting, retooled classic rock with a modern twist. Describing themselves as “Puss In Boots”, this four piece force of nature have delivered a statement of intent with their debut album.
Produced by Grammy Award winning Gil Norton (The Pixies, Foo Fighters) Ride Of Your Life has the essence of an old school record and encapsulates and distills perfectly JOANovARC’s live energy.
Ride Of Your Life is the journey of the band’s life from the beginning to present, the ups and downs on the road. “We are all great friends but have been through everything together, heartache, death, illness, sweat, blood, great times, addiction, narcotics, break ups, celebrations, fights and tears!”
This energetic and diverse album features 11 finely crafted songs full of rock’n’roll attitude and glamour. The opening title track sets the tone for a rocking roller coaster ride, and features the singles; the vibrant yet vitriolic Dragon In The Sky, along with the epic and empowering White Trash, the infectious Live Rock’n’Roll and the feel good joyride Seeds Of Summer. Plus, a further 6 songs, before the spiritually beautiful ballad Peace of Mind closes this sumptuous debut album in the best possible way.
“We are role models, we want to inspire young females and empower them” and Ride Of You Life is an inspiring statement.
To purchase Ride Of Your Life go to :: http://hyperurl.co/hvjjr8
iTunes: http://hyperurl.co/5gnh11
Google Play: http://hyperurl.co/p7ldmv
Amazon: http://hyperurl.co/xvkej1
To purchase Seeds Of Summer 7″ go to : http://joanovarc.co.uk/
Thanks to their relentless touring and high energy shows, JOANovARC have earned the title as one of the UK’s most promising rock acts, bristling riffs and jagged, riotous hooks are their poison – exceptional is not too strong a word.
Catch the band live, as soon as you can.
JOANovARC live dates
August
5th Pride (Acoustic set) Brighton
10th Bulldog Bash  Stratford Upon Avon
12th-26th P&O Rock Cruise
27th Ace Cafe  London
Previous article
Two Paths You Can Go Buy
Next article
Making The Possible Impossible