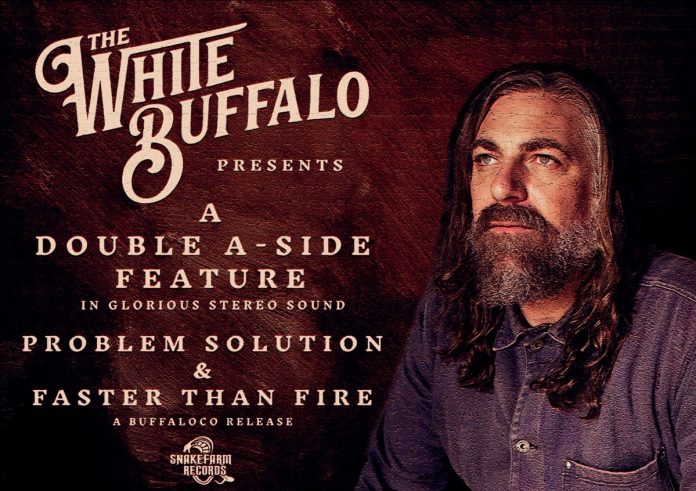 “I’m excited to share these two songs on this day. My hope is, in these strange and uncertain times they will give listeners some escape, hope, and solace.”
– The White Buffalo (Jake Smith)

Today, The White Buffalo (aka Jake Smith) released two new tracks from his forthcoming album On The Widow’s Walk as a double A-Side.  The new Shooter Jennings produced album is due on April 17th  via Snakefarm Records.

NEW STUDIO ALBUM ‘ON THE WIDOW’S WALK’
OUT APRIL 17th

PRE ORDER ON THE WIDOW’S WALK

The White Buffalo has also announced an exclusive live stream concert plus fan chat through the brand new platform Cadenza.tv.
The experience will offer fans a one-time-only, premium quality interactive live-stream event.  During which The White Buffalo will play new material from ‘On The Widow’s Walk’ as well as older songs and fan favourites. The session will wrap up with a live Q&A session.

Access to The White Buffalo: ‘On The Widow’s Walk’ Exclusive World-Wide Live Stream is a flat $10 USD. Purchasing a pass, adding to a user’s calendar, and joining the stream on April 5th at 12pm PST (8pm UK) can all be done at http://cadenza.tv/set/the-white-buffalo. The event can be enjoyed on any device.

About The White Buffalo:
“At a show in Sacramento, in the space of five minutes, three people came up to me with life-changing stories. They told me how my music had helped them to deal with the loss of people close to them…”

The White Buffalo is Jake Smith – singer, songwriter, guitarist, teller of stories, Emmy nominee; an artist whose voice – a timber-shakin’ baritone of gravitas and gravel – seems directly linked to a greater truth; an artist who will not be swayed by fashion or curtailed by genre.

Of the six studio albums and three EPs thus far released under The White Buffalo banner, this latest 11-track outing is the most collaborative and organic, the most sonically round. It’s also the first for Snakefarm Records, a young label within the Universal Music Group focusing on music that’s roots-driven and real.

On The Widow’s Walk is a bold and compelling statement from a unique talent; an artist whose instinct for working between the musical lines has seen his star very much on the rise, playing to a million followers worldwide and securing a Top 10 spot in the TV / Film Syncs Chart for 2019, with ‘The Woods’ (featured in TV show ‘The Punisher’) also figuring in the Top 10.

With uncontrived, hand-crafted music now receiving increased levels of attention, music straight from the source, the timing is perfect for this powerful, provoking new album and a fresh turn of the page.