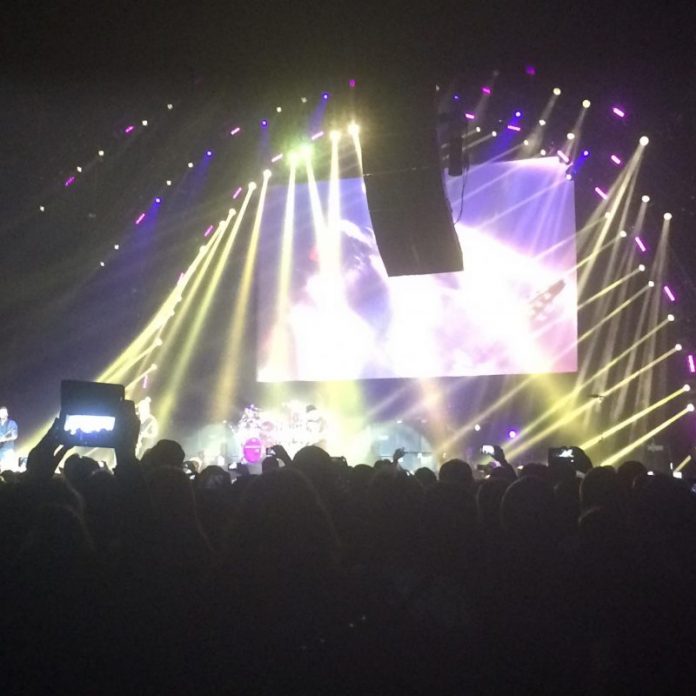 Are we having fun yet?

Justice, you know, is a funny thing. If there was really justice in this land, MV would be married to Natalie Sawyer from Sky Sports, but rather more importantly Monster Truck would be one of the biggest bands on the planet. Stars already in their Canadian homeland, shows like this aren’t going to harm their profile in the UK either. Neither are performances which prove what a lot of us have known for a very long time: Monster Truck are awesome. A four piece with big, thick riffs and a Hammond Organ would have to work hard not to be. In the event, their 45 minutes is a masterclass in how stuff should is get done. “Why Are You Not Rocking” is a pummelling classic in the making, “The Enforcer” is gleeful, and “Don’t Tell Me How To Live” is an anthemic statement of intent. The Truck are so good they even warrant an appearance from Ryan Peake – guitarist with tonight’s headliners – who adds his flourishes to the southern rock tinged “For The People”. That seminal debut “Furiousity” isn’t forgotten either, “Sweet Mountain River” is somewhere between glorious and vital, “Righteous Smoke” is even older, but is delivered as if lives depend on it, and by the time “The Lion” has closed things, even those that had never heard of the band before 7.30 tonight must surely see what is abundantly obvious. Monster Truck are unstoppable.

The vitriol we reserve for bands that have to all intents and purposes “made it” is ridiculous. Take Nickelback. Chad Kroeger and his mates haven’t committed a crime, they’ve made shit loads of catchy records that have connected with people. On a massive scale. That, my friends, is why there’s 10,000+ Brummies in here tonight, because for an hour and three quarters this evening they see a band do all that you need to in modern arena rock.

Basically, what Nickelback are is what Bon Jovi were, only with more sex. And more swearing. They verge from arena filling stompers like “Woke Up This Morning” to arena sized ballads like “Lullaby” with consummate ease and no little skill. As Chad himself puts it: “sometimes you just gotta pull at the heart strings.”

In between all this, there’s the ones your nan knows like “Photograph” and “Hero” from the Spiderman film, to the absolute filth of “Animals” and “Something In Your Mouth” and that’s the point, there’s something here to cover all the bases.

Nickelback, to their credit, aren’t as slick as some “arena rock” can be. They still look like they actually enjoy this and it’s not just some identikit show rolled out night after night. It is still a live rock n roll show. One admittedly with the mega hits in their back pocket. “Rockstar” is sung with the help of two audience members, “How You Remind Me” is kind of this show’s “Livin’ On A Prayer” if you will, and everyone knows it.

The encore sees Peake take centre stage for “Everlong” by the Foos, before things do end with “Burn It To The Ground” with its rage – oh and enormous hook.

People are always going to hate Nickelback. People have always hated hard rock that millions of other people enjoy. That’s how it goes. Nickelback know this. They don’t care less judging by their showing here. They do what they do, they are excellent at it and an arena full of people agreed. Sometimes that the only validation anything needs.

Or put another way, Nickelback couldn’t give a shit about your cynicism and/or jealousy, they’ve won already.