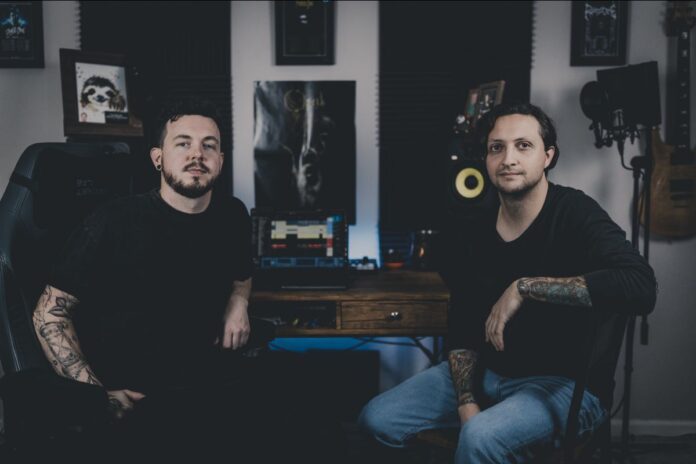 “Compositionally, this is one of my favourite songs I’ve written,” PHASEONE says.
“It flows so seamlessly between the metal and electronic sections and all around is such a powerful and emotional track! This was especially fun to write because Jesse from ERRA had a lot of hands-on work in the writing process, coming over to my studio to track some guitars and vocals. It felt like a REAL collab, compared to my usual process of writing everything and finding a vocalist.”

ERRA’s Jesse Cash states:
“When I realized Graeme and I both lived in L.A., I suggested meeting up in person to try and write something together from scratch. We were really excited by the idea of doing a true collaboration versus simply adding vocals to a pre-composed instrumental. I met him at his studio and just messed around on guitar a bit before we landed on a riff that we could build a song out from. Graeme kind of blew my mind with his efficiency and speed in creating exciting electronic layers. It completely shaped the momentum of the song. We accomplished what we hoped to, which was a song that properly incorporated both of our individual styles into a cohesive marriage. From that point, adding vocals was quick and natural. Singer JT Cavey and I basically ended up rolling with the first draft of the melodies and patterns you hear in the final version.”

World Unknown’ is the second in a series of PhaseOne collabs. The first collaboration was with Polaris for the track ‘Icarus‘ and it has already crossed over a million streams. Additional collaborations are on the way.

That’s to be expected — as PhaseOne is no stranger to collaborations. The artist has previously teamed-up with the likes of Northlane, Excision, Silverstein, Modestep, Crystal Lake, Thy Art Is Murder, and countless others, with his distinct brand of hard hitting metal welded with heavy-duty bass endearing him globally, racking up 75 million streams and a formidable live reputation in the process. And while his sensational emergence onto the scene back in 2013 saw him whip ears and crowds into a frenzy via his unique take on bass music production, his last endeavour, ‘Icarus’, alongside Polaris, was the first in a series of fresh collaborations with some of the most exciting names in the modern metal scene via a new partnership with UNFD. And for Polaris, it was a chance to fully venture headfirst into collaborative territory.