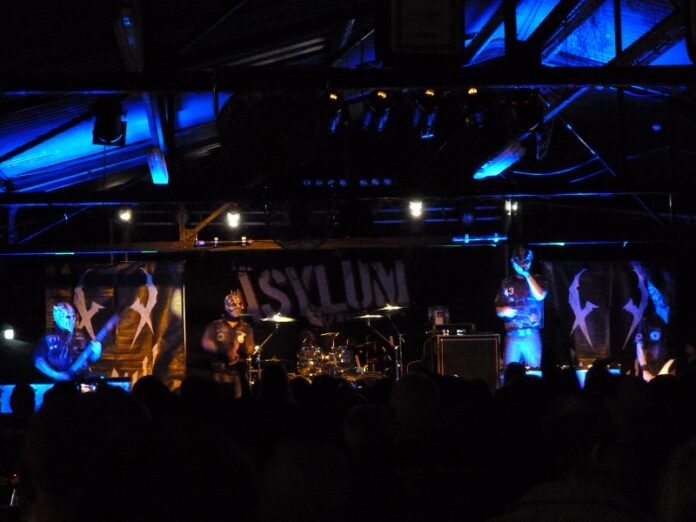 Cleveland, Ohio masked Metallers Mushroomhead venture to Europe for a twenty one date tour to promote their last album `A Wonderful Life` and the second date on this tour is at the home of heavy metal in Brum, The Asylum. The venue is packed to the rafters with six hundred expectant fans as the lights dim and the familiar opening bars to the first track on the latest release filters through. There`s no better a track than `A Requiem for Tomorrow` to kick off tonight with it`s kind of operatic come symphonic opening and it lights the touch paper to the mayhem that`s to follow.

Another cut from this album follows with `Seen It All` which has most of the faithful screaming and singing along.

The almost redemptive `Our Apologies` blasts out and the water drums are given a pounding and i`m sure those near the front, if splashed are grateful as the temperature in the venue is unmerciful. We head back in time for `Qwerty` a kind of defiant `call to arms` with profanities included.

The kind of melodic `Sun Doesn’t Rise` blasts out before `Solitaire/Unraveling` has a couple of band members not quite stage surf but use the crowd as human stepping stones and hang from the structure that is holding the venue roof up. It felt kind of amusing to me, viewing it from my relatively safe position towards the back. The thumping and hypnotic `12 Hundred` gets the crowd jumping up and down with the band almost orchestrating this show of power.

The troupe fly through the questioning `43`, the edgy `Kill Tomorrow` slow burn of `Destroy the World Around Me` and scorching `Before I Die`. There`s a complete change of pace as the band share the thoughtful ballad like `The Flood` which shows the diversity this band can offer. I`m sure `Bwomp` followed before the set closes out with `Born of Desire` which was intercut with snippets of Black Sabbath`s `War Pigs`.

Plectrums, drumsticks and setlists were thrown into the crowd as the guys left the stage after this brutal sixty five minutes of what at times was a tribal but wonderfully controlled wall of noise. Don’t let the distinct “X Face” logo masks fool you these guys can certainly deliver a disturbing intense cacophony of sound.

As we left the venue, one of the band had managed to get near the exit and was fist bumping all those that desired a more physical interaction. Certainly a night to remember.