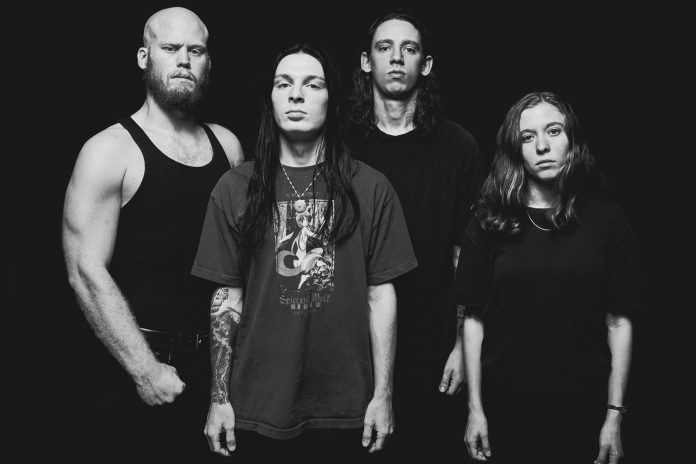 Code Orange have shared their official music video for industrial-tinged monster “The Mud,” which debuted in the USA during Adult Swim‘s Toonami this weekend.

The animated video, which was directed by Dmitry Zakharov and Code Orange’s Shade, is streaming now on the band’s YouTube Channel and on Adult Swim’s website.  Earlier this year Code Orange was announced for Adult Swim’s 2017 Singles Series, which features 52 new tracks from a variety of artists over the course of 52 weeks.

Code Orange are currently on a coast-to-coast run of North American dates alongside Gojira and Torche til mid-October. The band will remain on the road through the end of 2017 performing at an array of U.S. festivals including Monster Energy’s Aftershock and Ozzfest Meets Knotfest.  Code Orange’s upcoming tour dates also include two sold out nights at New York City’s Terminal 5 with The Dillinger Escape Plan and Daughters. For the latest news and ticket information please visit http://codeorangetoth.com/tour/.

Recorded with producers Will Yip at Studio 4 in Conshohocken, PA and Kurt Ballou at GodCity Studios inSalem, MA, the album FOREVER debuted earlier this year immediately staking its claim as one of 2017’s top releases and placing Code Orange firmly at the front of the pack. The Independent stated, “One of the early 21st century’s leading innovators in heavy music.” “Code Orange are winning over new fans in record time. Give them a chance and you’ll soon be theirs,” commented Upset, adding “Code Orange are nothing short of spectacular.” Having already called it, “The most important heavy release of 2017, ” Metal Hammer elaborated, “Forever isn’t just a great hardcore record – it’s one that’s ripped up the blueprint and pieced it back together in the most outrageously breathtaking way. This is a stone cold modern classic.” Shortlist agreed, calling it “life-affirmingly exhilarating,” with Terrorizer declaring it, “A confrontational, wilfully challenging, and obsessively interesting release.” Kerrang! said, “Hardcore’s most exciting band, drop the fiercest, most original noise of 2017.”

Not just beloved in the UK, in the US media Rolling Stone included FOREVER as one of the 50 Best Albums of 2017 So Far and selected Code Orange as one of 10 New Artists You Need to Know: February 2017 exclaiming, “FOREVER captures some of the most punishing noise the band has recorded to date, featuring songs rife with sudden transitions to still-harsher textures.”  The Fader featured Code Orange as one of their 13 Artists You Need To Know About In 2017, while Nerdist declared, “Code Orange is back and heavier than ever,” adding, “These kids were heavy before, but they just increased density by a hundred percent and then crushed all livings under their weight.” NPR praised Code Orange’s FOREVER,asserting that it, “…is among its most bruising works, with surprises throughout,” while Pitchforkasserted, “the heavy rock mainstream could use a good razing, and Code Orange are well-equipped for the demolition job.”  FOREVER is available at all DSP’s (Flyt.it/forever) with physical copies available at Code Orange’s official merch store.