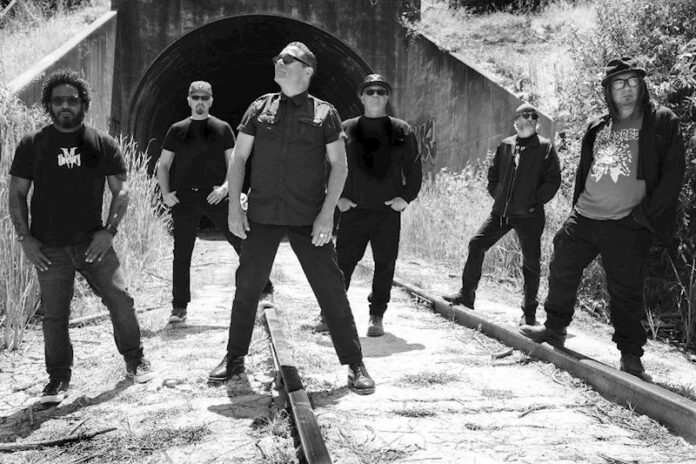 The influential San Francisco alternative thrash metal act MORDRED have revealed a new music video for “Demonic #7,” which can be viewed at https://youtu.be/giE67SVVA2o. The video is the latest visual piece for the band’s first new album in over 25 years, ‘The Dark Parade’ which was shot and edited by Eddie Granillo (Instagram @kept1) and stars Testament vocalist Chuck Billy as… the devil.

“The way I remember it, Eddie and Jeff [Gomes], our drummer, came up with the Chuck Billy devil storyline. It was Szandora LaVey [daughter of the infamous Anton LaVey] who was able to talk Chuck into painting him up when she came with the red paint, devil horns and the idea of being demon ladies,” explains singer Scott Holderby about the behind-the-scenes process.

“Szan and Edie Eve choreographed all of their moves, and our good friend Larry Chandeler did all of the animations and post-production so that Eddie could edit. It was a really fun shoot, despite a dry ice debacle, but, oh well, we had our personal smoke machine to puff it up.  It was also nice that our seventh band member Chris Powell could be in the video as well, (as he helped write the song and played on the recording of it). Ken Mooney crushed his part too (he’s actually a great singer in real life). There are realms even lower than hell…”

MORDRED continues to promote ‘The Dark Parade’ with more videos and live shows in the works. In recent months the band recently completed west coast shows with Defiance, a festival appearance at Blades of Steel in WI and a trip to Europe to play Hellfest in France. Next up Sept. 30th headlining Club Fox in Redwood City, CA.

“Demonic #7” follows music videos for “All Eyes on the Prize” https://youtu.be/K6s0TVVo02M and “Malignancy” – also featuring an appearance from Chuck Billy, as well as Death Angel drummer Will Carroll and former Forbidden bassist Matt Camacho – which can be viewed at https://youtu.be/rdyn3kXh7VU.

‘The Dark Parade’ features five-sixths of the personnel from MORDRED’s acclaimed 1991 record “In This Life,” plus new drummer Jeff Gomes (formerly of Fungo Mungo and MIRV). The album is the follow-up to their acclaimed 2020 EP ‘Volition’ and their first full-length record since 1994’s ‘The Next Room.’ The group return to the scene with a revitalized energy and successfully recapture their classic sound, which is rooted in thrash metal but veers off the straightforward path for more adventurous musical explorations by utilizing funk-infused musicianship and hip-hop influences. “The Dark Parade’ showcases a band that sounds as fresh now as they did during their initial decade of existence.

MORDRED was formed in 1984 as the burgeoning Bay Area thrash scene was beginning its rise to global prominence. While mosh-inducing thrash formed the basic blueprint of their sound, MORDRED stood out as a unique presence thanks to their integration of the aforementioned funk and hip-hop influences. The group was one of the first Bay Area bands to explore those diversities in extremes, but as the dexterous bass performance of Art Liboon and innovative turntable work from band collaborator Aaron “DJ Pause” Vaughn provided a new spin on the thrash metal genre, MORDRED retained their metallic bark thanks to groove-laden shred from guitarists Danny White and James Sanguinetti and energetic shout-along choruses spearheaded by vocalist Scott Holderby. That combination of thrash metal and exploratory funk powered three full-lengths on Noise Records between 1989 and 1994: their revered debut “Fool’s Game”; their eclectic sophomore follow-up “In This Life”; and their final – until now – record, “The Next Room.”