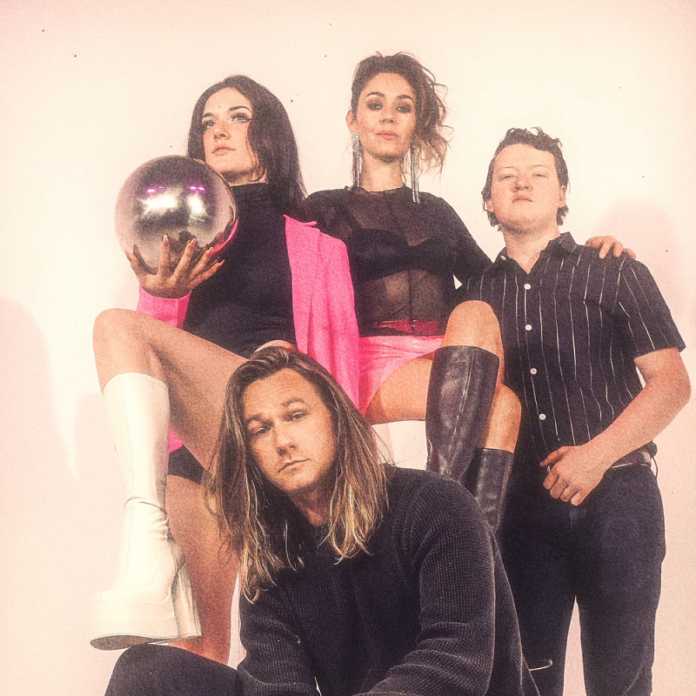 Flight Attendant is an eclectic indie-pop/rock group from Nashville. Blending guitar pop with viola, piano, synth and electrifying vocals, they were described by Louder Than War in a recent review as “a blend of alternative and heavy rock, glam, grunge and pop, often with anthemic overtones, together with a mix of both sensuous and uplifting vocals and provocative lyrics. They have emerged as a very exciting and eclectic indie rock band.”  They have issued several singles to date that have ranged from the pulsating and hypnotic ‘Man Of Chaos’ to the darkly sensuous ‘Comedy Show’, and from the post-punk earworm ‘dogs’ to a recent solemn rendition of the Americana classic ‘In The Pines’.

A new single entitled ‘Crybaby’ is released today to coincide with the announcement of their forthcoming self-titled debut album, plus a 25 date European tour to promote it. An exuberant anthem, the band’s lead vocalist Karalyne Winegarner explains the lyric of ‘Crybaby’ by stating “I’m personally so over being sad and complaining about life. The constant, endless scrolling through the hell of social media and comparing my life to others…. F*** that. This song is about kicking and screaming my way out of depression until I feel like the badass that I know I am.”

A literally smashing video for ‘Crybaby’ has been made by director Casey Pierce, who adds that “I had to make a video for this song. Karalyne’s charisma and the level of energy the band brings really spoke to my deep punk roots.”

Karalyne Winegarner (lead vocals, keyboards, certified Sommelier, from Kansas City) met Vinny Maniscalco (guitar, vocals, award-winning bartender, from Boston) while working together at a restaurant in Nashville, where Nikki Christie (viola, vocals, great at drinking wine, from LA) soon went to work too. It didn’t take too many nights of cocktail-making and wine-tasting before they decided to form a band. With the addition of drummer and long-time drinking buddy Derek Sprague (drums, lager lover, also from Boston), the line-up of Flight Attendant was complete and they soon began playing local shows and recording songs.

TurnUpTheVolume have compared the group to “Warpaint having a dance with Best Coast”, while there have also been references in other reviews to iconic artists such as Lana Del Rey, No Doubt and even Fleetwood Mac.

Flight Attendant have been ready for take-off globally since before the pandemic – not to mention a TV drama with the same name that subsequently hit our screens – and have a first European tour booked throughout November to promote their debut album, which is set for release on 30th September and has been produced by Grammy Award-winning engineer and producer Charles Yingling with the assistance of his cabin crew.