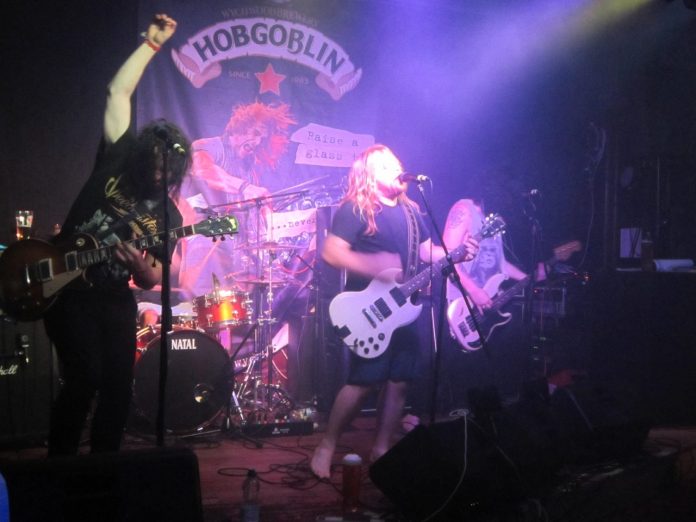 A gig in a pub is probably something Tequila Mockingbyrd dream of. Sure, they’d like to play Wembley and all, but they do possess a song which proclaims: “all I wanted was a Jagerbomb”. Frequent visitors to these shores, and constant touring, means that where this Aussie trio were always snotty, trashy and fun, they are now snottier, trashier and the smiles just a little bigger. There is just a whiff of punk trouble about them, “Never Go Home” appears to be not so much a request as their mission statement, and “Half A Man” is just enough to make all the limp dicks shrink just a little further – and so warm is it in The 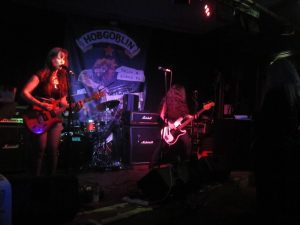 Iron Road tonight MV can’t even use our usual “it’s a cold night” excuse. Not every band and not every piece of music has to reinvent the wheel, sometimes being entertaining is enough and it’s a trick that this new line up of the band have come close to perfecting, just as the last one did. “Why Are We Still Friends” is as simple as it gets, “Good Time” is self-explanatory and there is something that suits them just perfectly about their cover of The Ramones’ “Somebody Put Something In My Drink”. Ending as ever with “I Smell Rock And Roll”, the odour of which is clear this evening. Sweat, leather ….and Jager of course.

Brad Marr, the bundle of energy that fronts Massive has a confession: “Thank you, Evesham for witnessing history. I’ve never played a gig in shorts before, “ he says, before adding: “I am not wearing any underwear either.”

He had, just a few minutes earlier said something that troubled MV far less. At the very start of the set he yelled: “We’re Massive from Australia, and we play rock n roll.” And this lack of frills is their absolute charm. If Massive weren’t in Massive, they’d be in the crowd having a couple of beers watching a band like Massive.

Tonight  – almost literally – they are at Full Throttle. That is to say, for this run they are being joined by founding member Ben Laguda on Lead guitar and they sound better than ever on a set of early tunes from the debut album of that name. “One By One” is hedonistic, strutting and quite fancies kicking your head in, “One For The Road” is the type of drinking song that is their natural home, “Dancefloor” slams, and “Burning Sun” is dusted off for the first time for ages and sounds great.

Not that this is all about the old songs, “Ghost” slows things down and the brand new single “Calm Before The Storm” is more than a centrepiece it is a genuine highlight.

They conclude with “Now Or Never” – as if they are trying to remind themselves that they need to do this, but as they are yet again just a few dates into another huge tour, the thought remains: if effort equated to fame, then Massive would be, well, massive.