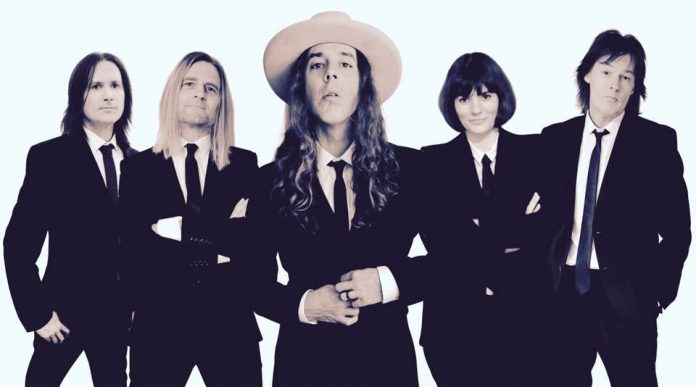 ‘This Is The Sound’ is the debut album from Ryan Hamilton and the Harlequin Ghosts and is released on 31st May 2019.  This is preceded with a single ‘Mamacita’ out now, 29th March 19 with a very fun video to be seen here.  The band will also be on tour across the UK in June with dates to follow shortly.

Signed to Wicked Cool, the label run by Little Steven/Steven van Zandt (a long time supporter and co-writer of ‘Mamacita’ – Ryan commented “Stevie heard it and said, “It’s good, but it needs a chorus”. So, he wrote one and sent it to me!”) the album was teased last year with the track ‘Bottoms Up (Here’s to Goodbye)’ which received support from the likes of Classic Rock and premiered on Kerrang! Radio. Backed with a punked up cover of the Paula Abdul smash ‘Straight Up’, Ryan explained “I’m super proud of this song. It’s a fun rock n roll song, with a fun sound/vibe. But over the top of some pretty serious subject matter. Alcoholism… and how to escape a bad relationship.”  On the back of this release the band made their first visit to the UK (under this name) in October 18 for a 9 date headlining tour.

Although this is this band’s debut release, Texan singer/songwriter Ryan Hamilton has been releasing music for several years now under various incarnations.  He cites classic acts such as the Rolling Stones, Tom Petty, Beatles and John Mellencamp as influences but the music and lyrics have a modern fresh sound thanks to producer and long time collaborator Dave Draper (the album was recorded at his studio in Worcestershire and Ryan’s in Texas).

Ryan hooked up with former touring buddy Ginger Wildheart for a charity single (for the Samaritans) in December 16 – ‘F**k You Brain’ lyrically addressed the importance of good mental health, an issue very close to Ryan, who suffers from bi-polar disorder.

This theme has carried on with this new record with Ryan explaining “This album feels like a lifetime in the making. I guess I finally got old enough to garner the courage to go visit and inquire about my own ‘deal’.  I’ve always been curious about the crossroads, the overall themes of mortality, love and life.  Up against the hopeful sounds of pop/rock might seem like an odd mix, but if it’s good enough for Tom Petty it’s good enough for any of us”.

‘Won’t Stop Now’ was written during the aftermath of some unspeakably cruel online bullying, which got so bad, Ryan had to get the authorities involved. ‘Far Cry’ addresses the fact that “We all have dreams and goals as kids and rarely are those dreams fully realised as adults. We still, however, have to find happiness in life so we shouldn’t be so hard on ourselves.”  ‘All Fall Down’ draws from his Christian upbringing, and eventual ‘deal with the devil’.  On a lighter note, ‘Let You Go’ was inspired by Harry Potter! Ryan explains “This song was inspired by Harry Potter! The original demo/chorus lyric was ‘A love like Snape’ but my bandmates weren’t havin’ it so I tweaked it a little. But my fellow HP fans can take comfort in the fact that I kept, ‘a love with a cape’ as a tip of the hat to Professor Snape. That story line breaks my heart.”  The album title track however he has “ZERO RECOLLECTION of writing. That’s never happened before. Which is extra crazy considering this is my favourite song on the album”