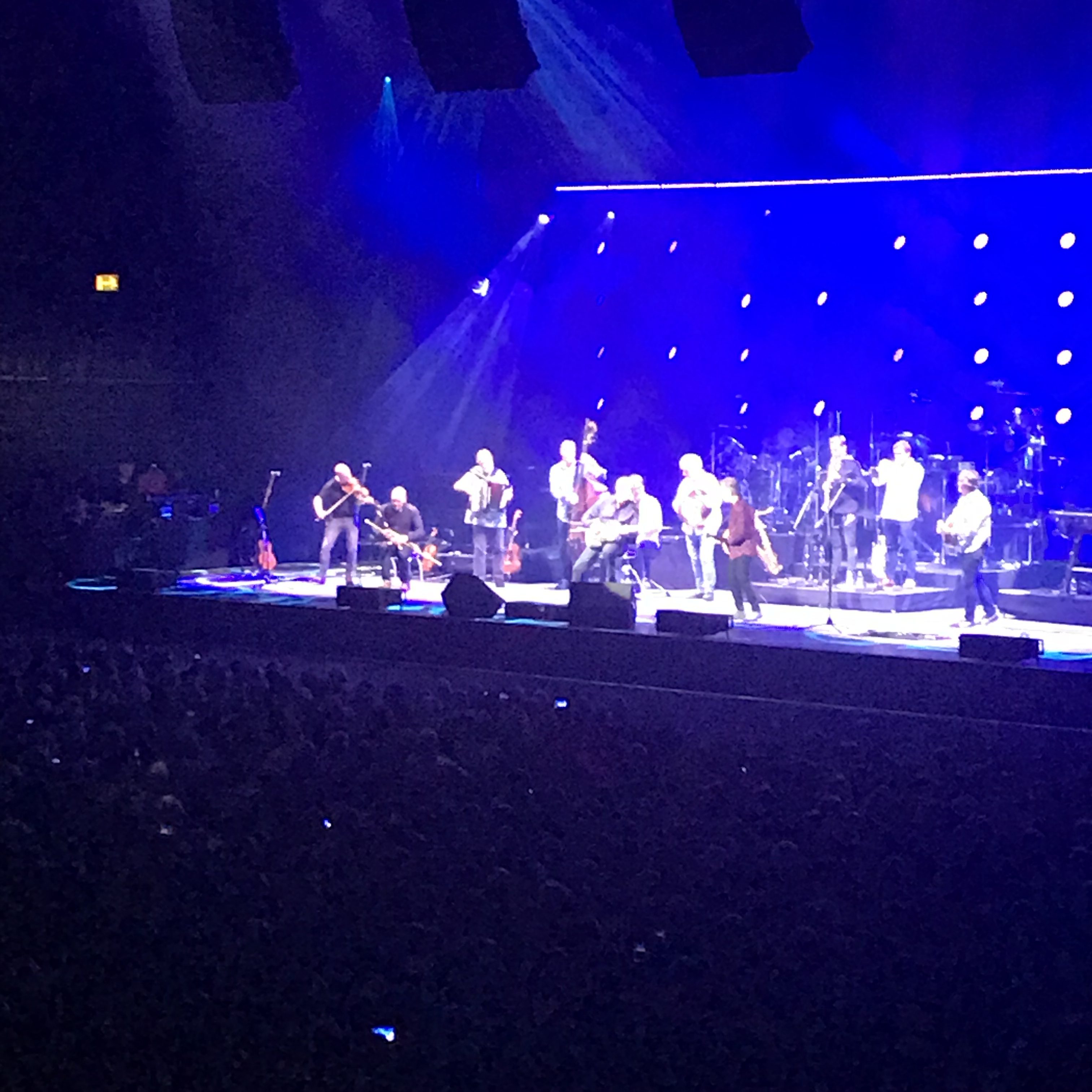 Mark Knopfler doesn’t say much, but right before “My Bacon Roll” – the song off his new “Down The Road Wherever” album about being out of step with the modern world – he imparts this: “I was going to retire, but…..” there’s more on that later.

And what a waste it would have been if he had! There is something gloriously under the radar about him. As if the kid that hitchhiked from Penzanze on Christmas morning and was immortalized in “Matchstick Man”, which is the other new song played tonight, has never left him.

That word “understated” is all through this like a golden thread. A wonderful player, Knopfler has surrounded himself with an astonishing band (one which plays 48 instruments no less) and their subtle brilliance is in evidence all the way from the opening song “Why Aye Man” onwards.

“Corned Beef City” is one that shows his more recent work in a wonderful light, but the haunting sax which opens “Sailing To Philadelphia” takes things to a dark place.

It is striking that as brilliant a guitarist that Knopfler is, he is merely mostly a cog in a glorious wheel. The first airing of Dire Straits tonight, “Once Upon A Time In The West” is augmented with some stunning flute, while “Romeo And Juliet” is given a makeover with piano and cracked vocals to the fore.

“Done With Bonaparte” (“I’ve been searching for years for the right way to play this” he says) takes on a Celtic flavour, but DS’s “Your Latest Trick” is a vehicle for yet more sax.

“Postcards From Paraguay” is Latin and jazzed up, before “Speedway At Nazareth” builds to a crescendo and a kind of conclusion. But only a kind of one.

There’s a few hits to do in the encore. The one I bought as a 10 year old is one. You may know it. It’s got that riff and goes on about “microwave ovens”.

There’s another encore after this, and that edition has “Brothers In Arms” in – and goodness what a version it is too – before a compelling and wonderfully constructed two hours ends with arguably the greatest instrumental of all time. The one you know as “Local Hero” but is really called “Going Home: Theme From Local Hero”.

The words he said after the “but” rang throughout like a clanging bell. “I was going to retire, but I just love playing for people”. It shows. And long may it continue.