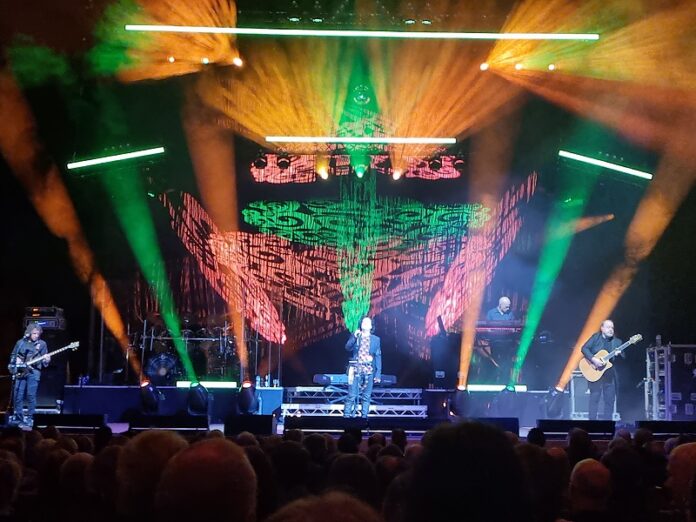 Mick Moss is an incongruous type of character. The fabulous Antimatter has been his home for a couple of decades now and the bleakness of his lyrics is at odds with the fact he cuts an avuncular note when he surveys the top tier of the vast Symphony Hall. “How we doing up there…..?” There’s a cheer, that he meets with “I didn’t feel like that when I wandered up, and I used to be a roofer”. Perhaps appropriate that he’d focus on the scope given that played in this fashion – a two man, acoustic/electric combo this half an hour is as dark and claustrophobic as it gets. “Partners In Crime” is typical with its dark, beguiling strains which almost seem to suck you in, while “Dream” might have a more strident guitar line, but somehow that only manages to increase its bleakness. “Saviour” from Antimatter’s debut album almost seems like a plaintive call for redemption, as it broods in on a dark pulsing air, while “Between The Atoms” seems to exist between the lines, between dark and light, and in a way that sums up Antimatter played like this, stripped to their bare bones, these songs are even more powerful.

“Excuse me,” says the pleasant lady next to me about 8.25pm. “What’s the Marillion connection here?” “What do mean?” says a slightly nonplussed MV. “Well”, she says, “There’s a lot of their T-shirts about.”

“Well, they are on in five minutes” says me. The look on her face is a picture. And the follow up line, I swear, is this: “Oh, are they supporting Seasick Steve?”

Seasick Steve was, in fact, on in the same venue a couple of weeks ago and the contrast couldn’t be bigger. There is a man who made a career out of being something he’s not, and here we have a band who has made a 40 odd year journey out of being exactly what they want to be.

My new mate and her partner duly do one when they look at their ticket date and that means they missed something absolutely sensational.

Quite simply, for just over two hours tonight Marillion, the band without a hit single since 1985, with no real public profile, the guys who do it themselves by their own rules, are the best prog rock band on the planet.

“Sounds That Cannot Be Made” is a brooding, almost shadowy opener, but my how “King” explodes and my how Steve “H” Hogarth does this with a sense of theatre and spectacle.

This is a set that is so thrilling and thought out and with peaks and troughs, like the almost country-tinged “Fantastic Place” and there’s a pop back to the 80s for an enormous sounding “Easter”. All the while there’s a chap in a grey suit on the right of the stage as I look who is almost the anti-guitar hero, but how Steve Rothray plays that instrument! The solo he plays here verges on the incredible. Its not the last one, either.

There’s a feeling that this an assault on the senses, “Bridge” seems to be done in surround sound, and they can get heavy too. “Living With The Big Lie” is suitably acerbic for 2021, but 2022 is represented too, with the new song (suite is perhaps more accurate), done in full – meaning all four parts of “Be Hard On Yourself” and it has all the hallmarks of modern Marillion.

“Afraid Of Sunlight” pops in almost below the radar, not a phrase you could use for “Neverland”. So full of OTT bombast (even down to H’s costume change) that you can’t resist it.

“Goodnight, Birmingham”, Hogarth had said after that one, but what follows is the most lengthy, labyrinthine encore ever attempted. “Splintering Heart”, which involves another costume change, and the playing of what looks like a cricket bat, but it pales into insignificance compared to “The Leavers.” That ode to touring from their last record, and in full. There’s a line in it too, where they talk about being home off tour and say: “And the hurt in your eyes, I know you know that I pray/For the phone-call that takes me away” goes out to their families, but if, maybe their families see this tonight, they’d get it. I am not a religious man in any way, and I’d burst into flames at the mere sight of holy water, but look at the crowd here, look at the reaction, this is like some kind of recital, Marillion are more than a band to these people. That’s why they can get their fans to crowdfund the insurance for this tour, and that bond makes these shows special.

There’s a second encore too, an acoustic, summery, “Made Again”.  That means the last lines tonight were these: “I woke up from a bad dream/To a brand new morning/To a brand new day/Like the whole world has been made again”.

This tour is called the Light At The End Of The Tunnel tour and, really it was and wasn’t. It wasn’t so much a light as an explosion like a supernova. Whatever else it was, it’s the best show I’ve seen since gigs resumed. I am sure Seasick Steve would have been too, of course.