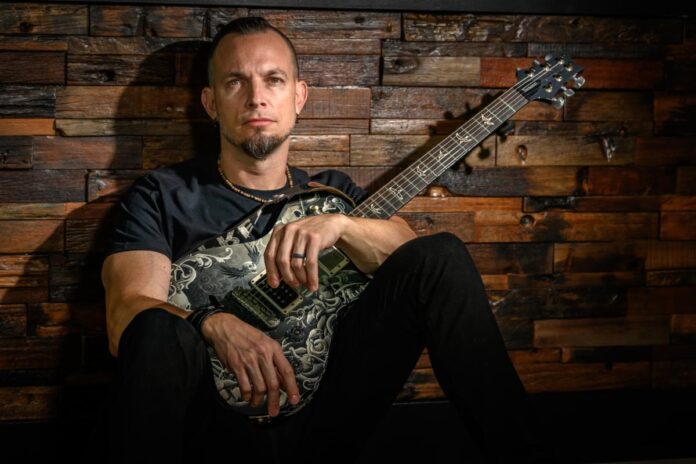 As Tremonti prepare to release their 5th studio album Marching In Time on September 24th the band has revealed a lyric video for the album’s fourth single, the spine-tingling “Now And Forever”. Its video emerges in visually captivating black and white, providing the perfect backdrop to the song’s gripping lyrics. Driven by the signature sound of guitarist Mark Tremonti as he sings: “My once jaded heart’s been fortified But left on empty,” the song and video are a perfect example of his keen ability to create memorable melodies and thought-provoking lyrics. The lyric video for “Now And Forever” can be seen HERE.

To commemorate the release of Marching In Time, Tremonti – comprised of Mark Tremonti (vocals/guitars), Eric Friedman (guitars), Tanner Keegan (bass) and Ryan Bennett (drums) – will be performing their first ever livestream, broadcast via NoCap Shows on the album release date (September 24th). The livestream will begin at 9pm ET / 6pm PT / 2am BST and will be available for the entire week following the premiere. The show setlist will be comprised of songs from the new album as well as fan favourites from the previous four albums. Tickets for the livestream are currently on sale and available HERE.

Mark Tremonti is no stranger to storytelling. Throughout his years with top-charting bands Alter Bridge and Creed, and most recently his solo band, Mark has never strayed from his love of writing memorable songs. With the upcoming fifth album, Marching In Time, the band looks to continue this trend while exploring their love for heavy music, drawing from current events from the last year to form the basis of each song. While its predecessor, A Dying Machine, was an overall concept album seeped in darker sentiments and story, the vibe of Marching In Time is different – emerging as a charging rock/metal offering that takes the listener on 12 individual journeys.
Marching In Time is scheduled for global release on September 24th via Napalm Records and fans that pre-order the album digitally will receive instant downloads of “A World Away,” “Marching In Time,” “If Not For You,” and “Now And Forever.” Marching In Time is now available for pre-order here: https://smarturl.it/MarchingInTime.  From the driving drum beat of opener “A World Away” to the epic closer “Marching In Time,” the new album is a reflective look at the world around us today. TREMONTI’s unmatched musicianship bleeds through the album, showcased on tracks like “Thrown Further,” “In One Piece” and the thought provoking “Would You Kill.” Alternatively, the band displays their softer side on pensive tracks “The Last One Of Us” and “Not Afraid to Lose.” The debut single “If Not For You” shows the evolution of the band’s sound in 2021 and the accompanying video is a frenetic, high-energy performance that visually compliments the single. The album closer “Marching In Time” clocks in at 7:34 and a recently released music video for the epic can be seen here. Marching In Time was produced longtime friend and collaborator Michael “Elvis” Baskette – the producer Mark has worked with exclusively since 2007.
Marching In Time is available in the following formats*:

*Additional formats will be available via individual retailers.