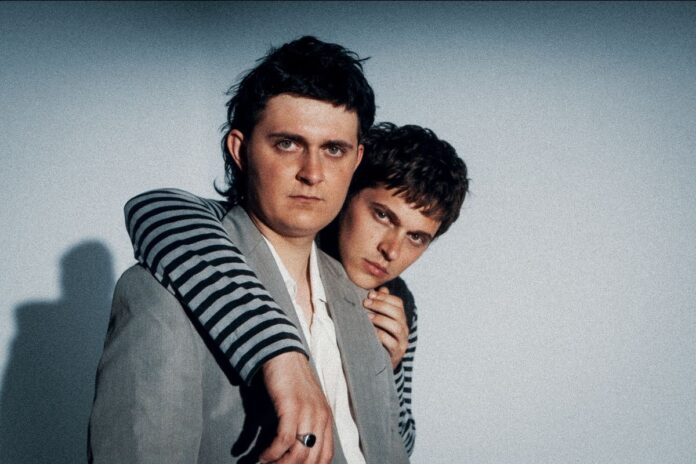 German punk duo THE DEADNOTES are delighted to kick off their year by announcing a run of February 2023 UK co-headline tour dates with Watford anarcho-punks NERVUS.

Tickets are on sale now and available via: www.thedeadnotesofficial.com

Commenting on their affinity for the UK and the upcoming tour dates, vocalist/guitarist Darius Lohmüller says: “The UK scene has always influenced us a lot in reclaiming our own art. Everything there feels bigger, more complex, and more international. There is more music there in many ways, both in quantity but especially in quality. We didn’t only realise this on previous tours, but also in the studio with our producer Bob Cooper, who we worked with in the UK for both our 2020 album COURAGE and also ‘Downward Spiral’.”

“We can’t wait to do exactly what THE DEADNOTES stands for with the newest and best version of ourselves: playing live shows and touring, especially with a band like NERVUS, who we really respect and who personally really inspire us. Not only do they make amazing music on their new album ‘The Evil One’, but also the political integrity of the band and the razor sharp analysis of political and social situations, often also regarding the status quo of the music industry.”

THE DEADNOTES released their latest single ‘Downward Spiral’ on 9th December last year, revealing a new line up and refreshed sound that you might not expect from a band from Germany, showing just why the band are, rightly, constantly touring successfully right across Europe, and especially the UK.

“In the last year, my actual idea of music, art, DIY as well as my own life was torn into pieces,” continues Lohmüller. “I realised how long and how often I did things just to please others or to conform with (scene) norms. Within this process, a lot of our true self couldn’t be revealed and stayed under the surface. Since then, we have been working hard as a band to put these pieces together in a new way—the way WE want it.”

New single ‘Downward Spiral’ underlines the development of the band, who released their second album Courage at the beginning of 2020, full of optimism and drive for the future of their career. In reality, however, it was all downhill for the band from that moment on: no matter if it was countless tour postponements, cancellations, or even van-loads of stolen equipment.

At a certain point, the pair reached an impasse where there was nothing left to lose…but that’s exactly when a newfound ease set in for Darius Lohmüller and Jakob Walheim that brought them back to music.

Listening to ‘Downward Spiral’ and watching the music video, it quickly becomes obvious just what Lohmüller is referring to. Sonically driven by Brit-Pop guitars, THE DEADNOTES have never sounded so detailed, so broad and so international, with complementary guitar and saxophone solos threaded throughout the new track.

The single landed on the cover of TIDAL’s Ampere: Rock & Alternative playlist for two weeks, picked up support from Amazon Fresh Rock DE and Apple Music’s New in Rock Germany, and gained a swathe of international underground alternative tastemaker nods from the likes of VISIONS, FUZE, OX Newsletter, Away From Life, Bring The Noise, Soundsphere, Rock Freaks, Maximum Volume, Alt Corner and more.

Further details of new music and live dates will be announced over the coming weeks.

Watch The Video For Latest Single ‘Downward Spiral’ Out Now