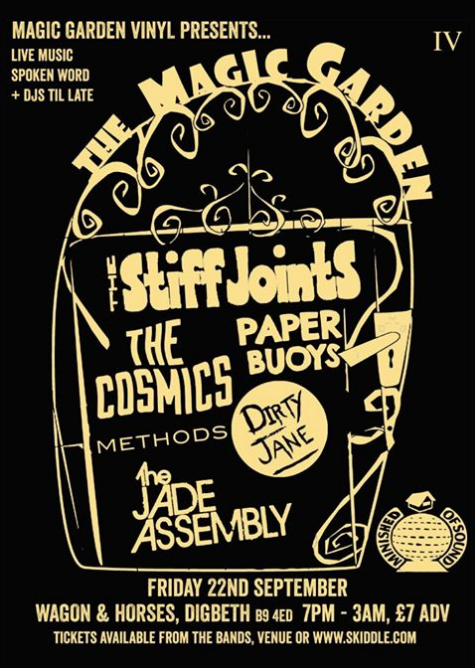 Steve has been busy, here’s his report of Friday night in Birmingham

The Jade Assembly a four piece from Bolton who have released a number of singles. They have a knack for writing songs with anthems and soaring choruses delivered with real feeling. These powerpop anthems with 90s alternative rock influences have hints of Oasis and Cast meet the Foo Fighters and Pearl Jam.

The forthcoming Single ‘Got My Star’ is released in November and they tour to support it.

Twin brothers, Conor (guitarist) and Danny (drummer) along with their cousin Erin (vocals and bass) are the garage punk rock trio that make up Birmingham’s The Cosmics.

Sounding to be like a cross between the Vaselines and the Vaccines the Cosmics definitely have their own raw sound and they thrash out their set finding time for a couple of slower numbers which are as catchy as their uptempo stuff.  They have confidence and ability well beyond their years, Conor never looks up as he bangs out some great riffs and Danny makes his own job look easy.

Their single ’Johnny’ gained much admiration and their second single, ‘Waste of Time’ is a classic break up song which sounds like Elastica with surf guitar, and is everything a solid garage rock track should be. With gigs and festivals lined up, it’s only a matter of time before they grace much larger venues much higher up the bill.

Methods from Wolverhampton/Manchester have been around a while and are clearly influenced by the 80s with key board riffs and off the hi hat drumming played with a dance feel. They are popular with the crowd and play some well-constructed songs and stand out track for me was the single Sanctuary.

Birmingham’s Paper Buoys are clearly candidates for bringing back political noise and social comment. This was an excellent set filled with angst ridden tunes played with venim and skill. They have the gang mentality and play off each other. The songs are well constructed and infectious with some pretty amazing guitar sounds. Past Single ‘Fun’ is a great song with hints of early Cure played with a much heavier feel.

As their set comes to an end, ‘Sharp As Razors’ with it’s haunting  guitar and pounding rhythms rages savagely against the government. With its “hate hate hate” hook it is no doubt a rebel cry for their fans. A great set and I will see these buoys again.

Stiff Joints are excellent live and despite their struggle to fit on the stage they play an excellent set mixing new album material with some of the older classics from their expanding back catalogue. Opener ‘Mona Lisa’ gets the crowd going and the tracks from their new album are welcomed like old friends by a crowd who know their material.

They clearly enjoy what they do and tracks from the new album such as, ‘Pop A Knocker’, ‘Beige & Onion’, ‘Vote for Me’, ‘Dead Yellow Elephant’, ‘Angry’ and the wonderful ‘Horns Of’ Fury had the audience dancing from the start as did earlier tunes ‘Swing your Sack’, ‘Bosh Bosh’ and ‘Don’t go Dancing on a Saturday Night’ (apparently not Burger Bigmore’s favourite).

Their cover of Wonderful World showed some real vocal talent and other cover Can’t Help Falling In Love’ was a great swaying end to their set.

Previous article
Review: Worcester Music Festival
Next article
Get Head In The UK