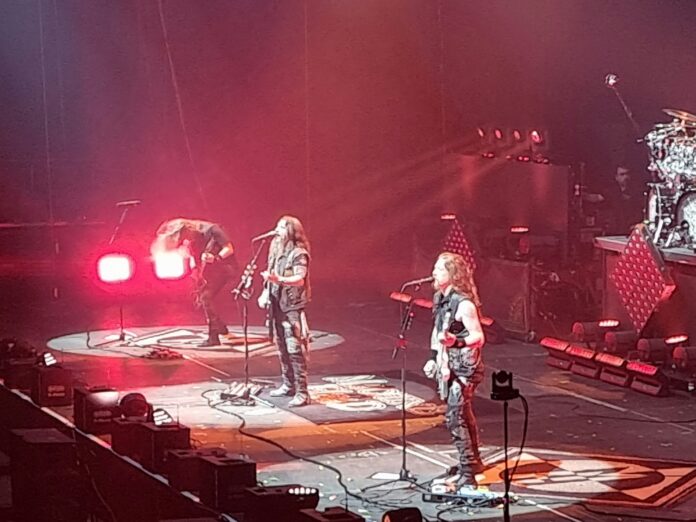 In Machine Head’s set, Robb Flynn gets the audience to give a round of applause to The Halo Effect with the words “Death Metal Royalty, right there!” He’s not wrong isn’t the boy. All five of them were In Flames at one point and singer Mikael Stanne still is in Dark Tranquillity. All of which means that the quintet are used to being on stages, and my, their class shows. More melodic than the “Gothenburg Death Metal” tag (although “Last Of Our Kind” is as fast and nasty as you like). “In Broken Trust” shows their depth and the last one “Shadowminds” – the first one they ever wrote – is indicative of the fact that people have been so excited by their debut, just released album. One of those bands, whether you like the style usually or not, it doesn’t matter. There’s something about The Halo Effect that you can’t fail to recognise as being excellence.

It is – as I discovered in-between bands almost eight years since I saw Amon Amarth. Maybe you all knew this, but next time catch me up, yeah? In that time everyone’s favourite Viking metal band have morphed into arena rockers. A stage show that has got more explosions than Kiss and more inflatable stuff than Iron Maiden, and songs. Good grief they’ve got loads of songs these days. In short AA are incredible.

On my notes for the gig I simply wrote “Viking Maiden” and I stick to it. “Guardians Of Aasgard”, the title track from their new “Great Heathen Army” record, or “Heidrun” (which received its live debut here) – or anything else for that matter that they play – is both unmistakably Amon Amarth (lets be honest the sound hasn’t changed over the years) but shot through with an extra bombast – and probably a flashbomb.

It helps, I guess, that this co-headline seems to have attracted fans from both bands, and Amarth have their own army that are totally into this. “Put Your Back Into The Oar” has the circle pit on the floor, seemingly spontaneously, for a kind of moshers “Row, Row, Row Your Boat” and after a riotous “First Kill”, old favourites “Raise Your Horns” and “Twilight Of The Thunder God” bring the voyage home, as it were, there’s no battle. Amon Amarth have finished and salted the earth. They were a force here.

“Do you want a fast one?!” screams Rob Flynn as the band his helmed for almost 30 years begins their first English show in a long time. “BECØME THE FIRESTØRM” is just that too – and as its from their incredible new album, it is a return to form.

There’s a problem, though. The sound is a little muddled. It is, as Flynn notes “Machine Head on the first night, everything that could go wrong will.” Certainly, things aren’t smooth. “Locust” isn’t played because his acoustic doesn’t work, “Ten Ton Hammer” is dropped to make time, and there’s just a few teething problems.

That all being said, mind you, they play ten songs and prove that its quality over quantity every time. “Imperium” is absolutely screamed out. And that vow underscores the whole set. No regrets? “Now We Die” never had them, never will and the other new tune they play “NØ GØDS, NØ MASTERS” proves how the ØF KINGDØM AND CRØWN stuff is inked into this set for years to come, just like “Aesthetics Of Hate” was too.

And, try as you might, no one who sees the Lionhearts And Vikings Tour will fail to be swept along by the last two. The one about letting freedom ring with a shotgun blast might be 28 years old, but I swear, every time is like the first time. And that’s before “Halo” finishes it, and as you watch Flynn playing a guitar battle with Wacław “Vogg” Kiełtyka (the new boy) you realise that however much has changed in the band, then they are the same as they ever were. Fast, furious, angry and incredibly talented. A different sort of set to the one before it, there’s the odd bit of pyro and a glitter cannon, but this feels more stripped down and more about the pure songs.

That is, after all, how you get to sustain a career for that long and the way you get to play arenas? Well, that’s easy. Have a lot of songs that connect with a lot of people. That’s Machine Head, and when they touch the heights tonight they are as good as it gets.