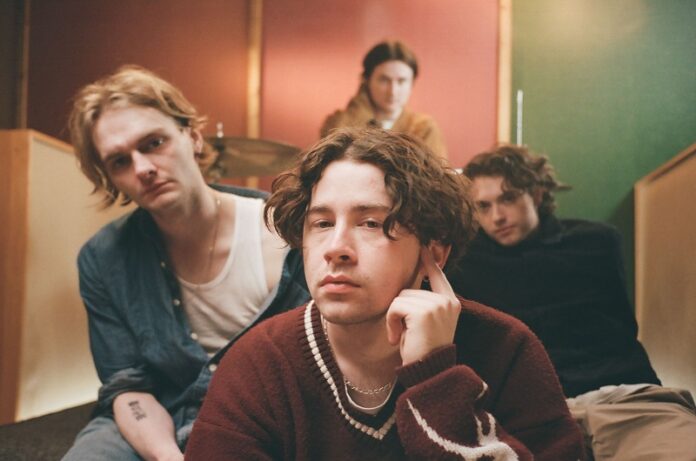 modernlove. ended 2022 on a high, earning support from Jack Saunders at BBC Radio 1, picking up a wave of critical adoration and selling out all ten of their English / Scottish headline shows in advance.

Now the Irish alt-rock band continue their arena-bound trajectory into 2023 with their new single Ruin Your Night. It emerges as they prepare for their debut headline North American tour in March, which is selling quickly and includes SXSW, as well as their largest UK tour in April.

Ruin Your Night shows the band’s limitless potential, an electrifying indie-pop dancefloor filler that feels like a modern missing link between Bloc Party and The 1975. While it rushes out of the speakers with an instant euphoria, its lyrics capture the relatable turmoil of a big night out that ends with the mess and regret of alcohol-fueled conflict. As vocalist and guitarist Barry Lally laments, “I promise that I didn’t mean to ruin your night / I’m sorry, it’s just what I do”. The song was written by modernlove. and produced by the band with Tom Leach (Lewis Capaldi, Years and Years).

The band comment that, “Ruin Your Night explores those times we’ve all experienced in relationships where every night inevitably blows up into a huge fight and it seems futile to ever try going out and having fun together. We all sometimes fall victim to alcohol-fueled self-sabotage, and this song attempts to capture both the fire and intensity of those nights and the quiet gentle melancholy of the mornings after. The song has a sort of sonic irony in that it’s a straight up indie banger about having an awful night out.”

The video for Ruin Your Night ironically sees modernlove. doing the complete opposite. An energising love letter to the communal rush of live music, the visual compiles highlights from their November 2022 headline tour – fans queuing around the block, backstage banter, rapturous receptions and countless moments of the band and their fans connecting in person. And, best of all, they’re soon about to do it all over again but on a grander scale.

Currently building towards the release of their upcoming third EP, modernlove. consists of Barry Lally (vocals and guitar) Graham Fagan (guitar) Daniel Rooney (bass) and Cian McCluskey (drums). They formed in Drogheda, Ireland in 2016 where they had no choice but to kickstart their own DIY music scene. It wasn’t long before their shows were packing local venues and, perhaps just as importantly, a community of like-minded bands and fans began to emerge in the area. What had been a desert for live guitar music eventually became an oasis.

When the band released their first two EPs, monochrome blue and Oh My Mind, they discovered the local following they had cultivated was replicated further afield. As their touring also expanded, they found that fans would find a hugely positive outlet from songs which often talk about the challenges that come with young adulthood.

The band’s forthcoming UK headline tour is as follows. They’re also confirmed to play Victorious Festival in August. Please see HERE for tickets as well as full details of their North American shows.

Previous article
ARTIST OF THE DAY: HARPY
Next article
REPLICATE THE REASONS