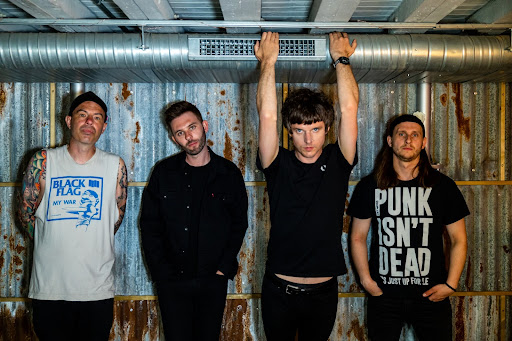 Following the release of their showstopping second album, PET NEEDS have released an incendiary new video for the featured single: “Lost Again”.

The full-force opening track of ‘Primetime Entertainment‘, ‘Lost Again‘ sets an electrifying pace from the get-go. Explaining why it was always first in line for their new album, frontman Johnny Marriott explains:

“‘Lost Again’ was always going to be the opener of ‘Primetime Entertainment’. It’s frantic and furious, smashed together in the summer of 2021 fueled by trashy chords and cheap wine…. In parts it’s a tale of defiant adventure – of drunkenly and euphorically stumbling 25 miles in circles round the Colchester Orbital path (literally and metaphorically). In parts it’s a self-reflection on self-destruction, painting over the cracks and pretending that everything is fine.  We’re lost again. But we ain’t ever stopping yet!”

Currently on the road with the producer of ‘Primetime Entertainment’, one Frank Turner, the band recently took a quick detour from the circuit to record an official video for ‘Lost Again’ in the remote wilds of the Peak District. Directed by Rockit Robbo, the video finds PET NEEDS frontman Johnny sending his bandmates on the ultimate fool’s errand. Chaos ensues… Watch the video here:
https://youtu.be/DIGGXKKPma8

Somehow navigating their way back to civilisation, the band remember of the shoot:

“In the middle of our UK tour with Frank Turner, we battled the elements in the beautiful and unforgiving Peak District as we chased a paper aeroplane up a mountain. Well, three of the boys did. Johnny somehow wangled his way into all his shots being either sat in the van or in the pub! We only got covered in a little bit of sheep poo, too. Success!”

“Lost Again” finds good company in exhilarating recent singles ‘Fear For The Whole Damn World‘ and ‘Get On The Roof‘, all of which were produced by Frank Turner during the sessions for ‘Primetime Entertainment’. Written and recorded in just 11 months after signing with Xtra Mile Recordings for their acclaimed debut, ‘Fractured Party Music’, the band’s latest album is a discernibly more personal effort than it’s party-primed predecessor. Dealing with feelings of fear, fatigue, adrenaline, failing and determination,’Primetime Entertainment’ proved to be a record of profound psychological and musical discovery for PET NEEDS that has produced a transfixing listening experience. Proudly dubbed by the band as “our ‘London Calling‘”, the new album has already been attracting warm reviews with NARC Magazine praising it as a record of “joyous experimentation” (⅘).

Following the release of ‘Primetime Entertainment’, PET NEEDS will be hitting the road for a stretch of support dates across the UK with Frank Turner (following their mammoth ’50 States in 50 Dates’ tour together in the USA), before a previously announced special homecoming headline show in Colchester Arts Centre on 16th December. With the Colchester show now completely SOLD OUT, the band are delighted to announce a full UK headline tour in the run up to Christmas – with tickets ON SALE NOW. Find your local venue as follows: