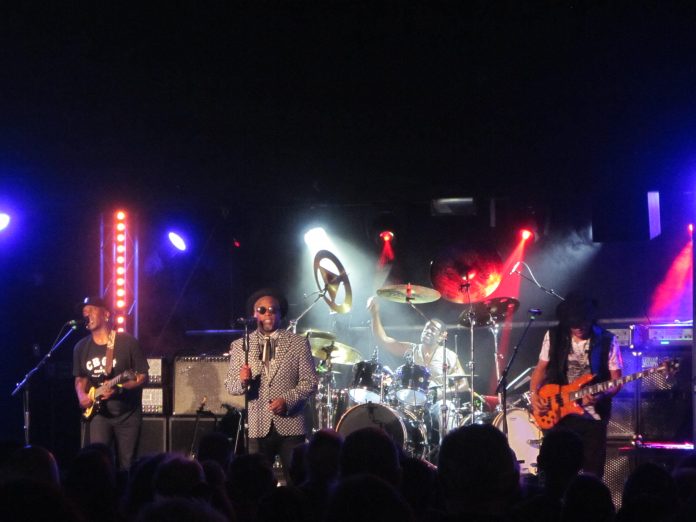 I have to say of all the gigs I’ve been to this year, this was the one I was most anticipating. I was fortunate enough to have seen Living Colour many times in the late eighties, early nineties but not since then. A real bonus tonight was that they had two support bands that I’d have been happy to see as headliners.

First up to the plate was East Troy, Wisconsin plank spanker Jared James Nichols. I`ve seen this blues rock guitarist a few times and he`s a real joy to behold. An air raid siren blasted out as the trio arrived on stage and blasted into the sublime `Last Chance` from his 2017 acclaimed release “Black Magic”

Indeed the next three cuts are all from this album with the churning `Don`t Be Scared`, a song that is made for driving `Honey Forgive Me` and the blistering `End Of Time.` Jared has the audience singing along with the catchy `Baby Can You Feel It` before sharing the intense `Nails In My Coffin`, `Hardwired To love You` and finishing with a cover of the Mountain classic `Mississippi Queen` as he always does. His usual powerhouse were with him tonight with Ronnie Elvis James on bass and Dennis Holm on drums.

It can`t be too long now before this guitar virtuosity is headlining shows like this. 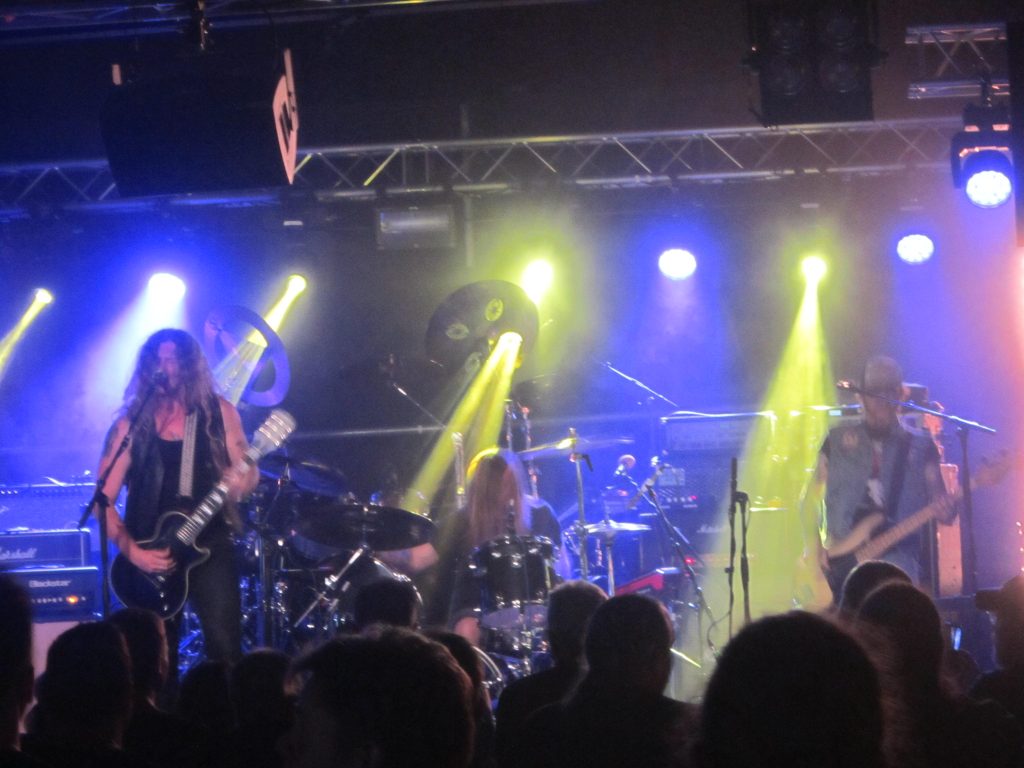 Wayward Sons arrive on stage with Johnny Cash`s `Folsom Prison Blues` ringing out and explode straight into `Alive` from their debut album “Ghosts Of Yet To Come” If you don`t already know Wayward Sons have Toby Jepson on vocals and guitar, ex of the much missed Little Angels and Gun. But if you think this is just another project for him, think again, this is a superb melodic British rock band that has a plethora of talent with Sam Wood on guitar, Nic Wastell on bass, Dave Kemp on keyboards and Phil Martini on drums. My favourite track ` Don`t Wanna Go` comes next with its churning great riff that AC/DC would be proud of. `Ghost` gets an airing before the guys share a track off “The Truth Ain’t What It Used To Be” the new album that`s due out in October with `Any Other Way` The show closes out with three more tracks from the debut album with `Crush`, ` Small Talk` and `Until the End` with a couple of cuts from the new album `Little White Lies` and `Jokes On You` sandwiched in between. The band are a wonderfully enjoyable, no nonsense, good old-fashioned hard rock outfit and Mr Jepson seems to relish his role in fronting them. The guys are touring as support to the brilliant Black Star Riders in October. Make sure you`re there. 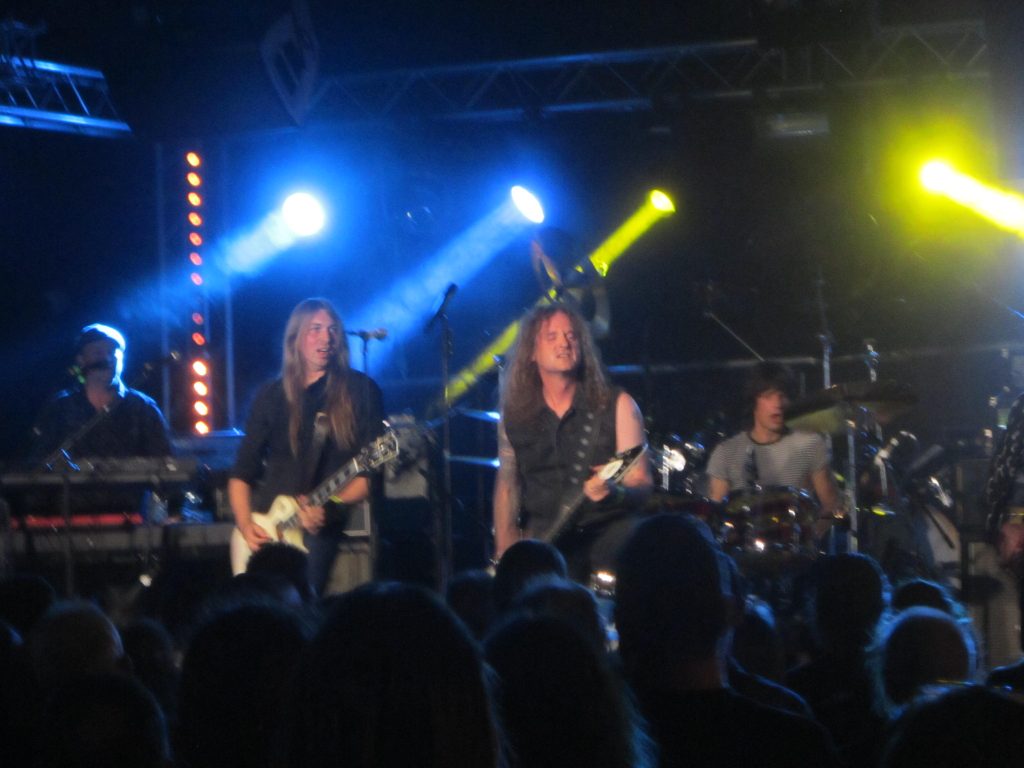 What can you say about the legends that make up Living Colour? Nothing new i`m sure. A fusion of heavy metal, funk, jazz, hip hop, punk, and alternative rock whose albums were full of political and social commentary. They shone brightly from their formation in New York in 1984 until they disbanded in 1995. Thankfully they reunited in 2000 and are touring the 30th Anniversary of their classic release Vivid”

There`s little fuss as the guys arrive on stage and before they play the album in its entirety, they offer up `Pride` and `Come On` a track from their last album, 2017s “Shade”, their first release in eight years.

The album kicks off with what is probably the band`s best known track `Cult Of Personality` with everybody in this packed crowd singing along. Vernon Reid`s guitar solo is as fresh and impressive as it was thirty years ago, a joy to behold. I love `I Want To Know`, it`s such an infectious song with a bass line to die for, curtesy of Doug Wimbush. The guys bash out the tracks such as the funky `Middle Man`, spikey `Desperate People`, `Open Letter (To A Landlord) ` with it`s heart breaking lyrics and the politically charged `Funny Vibe` where Will Calhoun`s drumming is out of the park. The Talking Head`s cover `Memories Can`t Wait` and the ballad like `Broken Hearts` are shared before the throwaway `Glamour Boys` has the crowd singing along and back to singer Corey Glover, who is looking very dapper tonight with a suave suit and elegant hat. The band`s theme tune `What`s Your Favourite Color? ` is launched before tonight closes with `Which Way To America? ` which merges into the unnerving almost psychedelic `Operation Mind Control` and the band take their bows and exit the stage. It doesn`t take long before the fellas are encouraged back and leave us with the African vibe of `Solace OI You`

The guys again take their deserved plaudits and seem genuinely moved by the reaction of this cheering jam packed crowd. It`s about time this underrated band, got the recognition they deserve. Their music and message are as relevant today as it was thirty years ago.