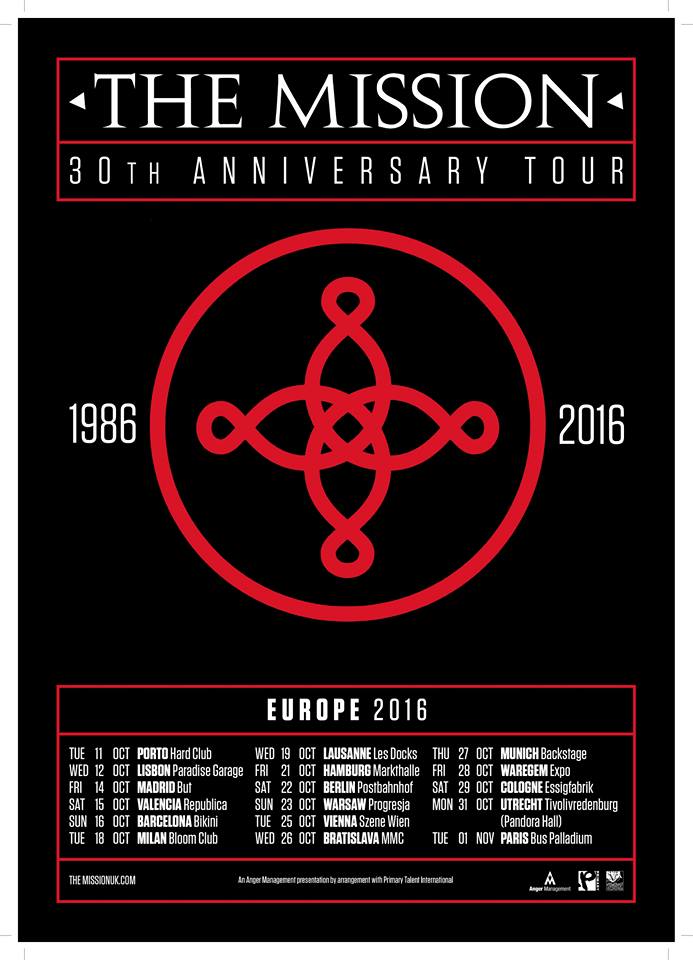 The UK’s premier goth rock merchants are 30 years old and there was a party in town to celebrate.  Donnie got an invite….

Goth rock lovers had come out in force for the celebration of 30 years of The Mission as Rock City was close to a sellout.  before their heroes took to the stage though there was an added bonus of former Bauhaus frontman Peter Murphy as support.
Looking resplendent in all black with a tourquiouse scarf showing no signs of the personal difficulties that have plagued him in recent years.  He is more than familiar with Rock City having played the venue on several occasions even revealing his delight that the “awful red carpet” that once adorned the stage was no more.
A shortened set due to the later than advertised start didn’t dampen the spirits of the former Bauhaus frontman.  The “Godfather of Goth” was in fine voice as the ethereal opener “Cascade” proved.
When you can call on tracks like “All Night Long”, from the 1988 album Love Hysteria and “Strange Kind of Love” you know that the odds of winning over an already excitable crowd are pretty much nailed.  They are classics for a reason and Murphy knows how to treat a classic.
Speaking of classics the seminal Bauhaus track “Bela Lugosi’s Dead” gets a brief outing and is lapped up by the hundreds in attendance.
By getting here early the crowd made a wise choice but then having someone of the calibre of Peter Murphy opening how could it be anything but a triumph.
The Mission, in case you have missed it, are celebrating 30 years as a band.  Leader Wayne Hussey would have been delighted to reach the one year anniversary if you had asked him three decades ago.  There have been a few changes to the line-up and a couple of aborted attempts to bring an end to The Mission but a beast like this is not easy to kill.
It’s the Dambusters theme that heralds the arrival of Leeds favourite sons.  A tune that is as familiar to fans of the band as one of their own hits.  It builds nicely the sense of anticipation and as the band walk onto the stage the closing notes of the piece are drowned out by a wall of noise created by a near sellout crowd eager to begin the celebrations without delay.
“Beyond the Pale” is the set opener and acts as a marker in the sand for the following ninety minutes. “Serpent’s Kiss” follows with an immediacy and energy to shame the young pretenders that dare to follow in this bands footsteps.
It’s three songs in before Wayne Hissey declares “because you like the old songs…..here’s a new one”. Unlike many bands it seems fans of The Mission greet every track be it old or new with the same roar of approval.
It’s “Tyranny of Secrets” that makes an appearance first. A short blast of modern day Mission that reminds the older generation who grew up with the band that they are still as vital in the modern music world as they were back in their chart-topping heyday of the 1980’s.
It’s one of only two from the brilliant new album “Another Fall From Grace” , with the excellent “Met-Amor-Phosis” being the other, that makes it onto tonight’s setlist but then the band do have 30 years to cover and not much time to do it.
“Severina” and “Like A Child Again” retain their anthemic quality and are delivered with the passion and enthusiasm as if they were being played for the first time.
As well as being guitarist and frontman for the band Hussey is also somewhat of a raconteur regaling the audience with tales and pearls of wisdom. It all adds the the undeniable charm and spirit of the band who are revelling in their status as the dark lords of gothic rock.
Of all their tracks played tonight none got as much crowd participation as “Tower of Strength”. Arms thrust forward in almost religious fervour extolling the mantra “you are a tower of strength….to me”. It also featured a blistering solo from lead guitarist Simon Hinkler. That said “Wasteland” comes pretty close.  The confetti cascading from the ceiling helps with the general bonhomie. It closes the main set in riotous fashion.
The first encore comes with just Wayne, the backing singer and an acoustic guitar for a chilling rendition of “Black Mountain Mist”.  “Butterfly on a Wheel” reunites Wayne with drummer Mike Kelly, bassist Craig Adams and Simon and they pick up where they left off.
The energy is picked back up, if in a slightly disjointed fashion, for a sprint to the finish with “Shelter From The Storm” before “The Crystal Ocean” and “Deliverance” bring the evening to a close.
Whilst the short-medium future of the band is always open to debate what is guaranteed is that the hardcore fans, known as Eskimos, would not have gone home cold tonight.
If the plan was to celebrate the legacy and musical genius of the band whilst making the fans happy and throwing in a couple of brand new tracks to remind everyone they’ve still got it then mission accomplished.
Donnie’s Rating:  Peter Murphy – 8/10
The Mission – 9/10
Previous article
Salute This
Next article
Blood On Blood