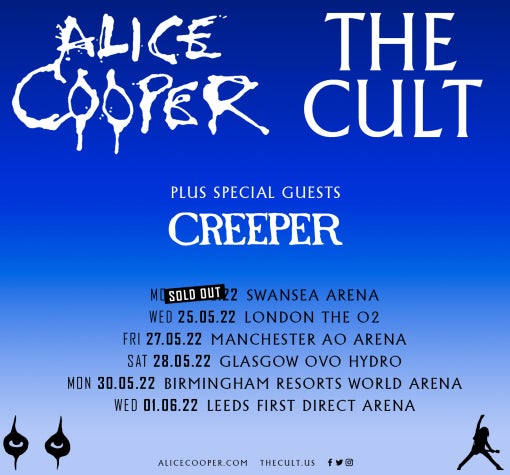 Southampton Goth rockers Creeper were the opening band however, your author and MVM editor Andy, failed to arrive in time to witness their performance.  Fortunately fellow MVM stalwart Damian Sullivan was on hand to give us the low down.  He described them as “not too bad”.

Whilst Creeper are at the start of their career, The Cult on the other hand have been there and done it many times over.   “Sun King” kicks things off in fine style, although it is apparent that vocalist Ian Astbury is not in the finest of moods, almost immediately shouting at the crowd to “get up”.  Now in Astbury’s defence it must be said that the layout for the show is easily the worst I have come across in over 30 years of gigging. For a start you don’t have seating on the floor for a rock n roll gig.  Seating on the sides…no problem, seating at the back….no problem but seating on the floor, in the words of the much missed comedian and actor Frankie Howerd “nay, nay and thrice nay!!.

It was not only the fact that the floor was all seating it was also the vast distances between each block of seating on the floor and the distance between the seats and the tiered sections that made the whole thing feel like watching a band play an awards ceremony.  No wonder Astbury was agitated.  To be fair to the crowd they followed his will and stood up in unison….well once one stands up you’ve all got to really if you want to see anything!!

“Automatic Blues” and the classic “Sweet Soul Sister” quickly got the performance into some sort of rhythm and from then on it was a decent set, all things considered.  It’s very tough to fail when you have “Edie (Ciao Baby)”, “Fire Woman” and “Revolution” in your arsenal and whilst it never really felt like a classic Cult performance it was nonetheless a good warm-up for the main man.

When you cannot remember how many times you have actually seen a band or artist live then that usually means that A:  you’ve seen them far too many times B: you know what to expect.  In the strange case of Alice Cooper it must be said that there is no such thing as “too many times” and tonight proved you can never predict what the 74 year-old legend will do next.

Cooper is revered has the father of shock rock, a master in the art of theatrical storytelling.  The first half of tonight’s show was simply a great rock and roll show. As stripped down as a Cooper show gets.  Of course the opener “Feed My Frankenstein” features a 15ft monster but his appearance is brief and not typical of the next thirty minutes or so.

“No More Mr Nice Guy’, ‘Bed of Nails’ and “Hey Stoopid’ come and go in the blink of an eye.  No theatrics just pure balls-out rock n roll.  Eventually the drama of “Roses on White Lace”, “Steven” and Dead Babies” would play out in a familiar fashion.  Three tracks from the more recent entrants into Cooper’s catalogue get an airing.  The sublime “Fallen In Love” from 2017’s Paranormal is a great reminder to the uneducated that not all of his great tracks are works of the dim and distant.  Last year’s homage to his home city of Detroit produced two tracks tonight.  The first being “Shut Up and Rock” which in truth is a bog-standard rocker and not one of the best tracks on the Detroit Stories album so it was a surprise to see this in the setlist.  That said it is relatively short and bleeds nicely into the supercharged “Go Man Go” which is made for the stage if ever a track was.

Backed by a line-up of talent that any rock star would kill for the quality is unrelenting.  There a more hits than the average heavyweight fight and even with the aforementioned layout issues it still felt like you were in the presence of something truly special.  That is the essence of Alice Cooper.