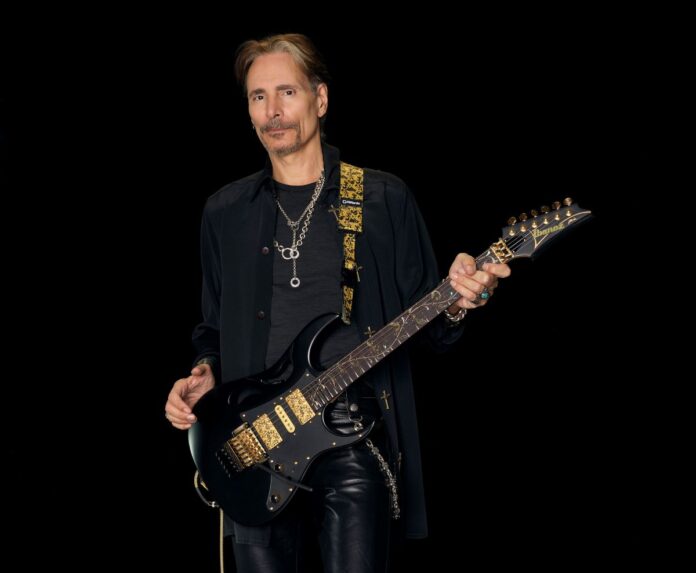 Steve Vai and Favored Nations / Mascot Label Group have presented an official music video for Little Pretty.  The composition is featured on Vai’s upcoming studio album titled Inviolate whichwill be released digitally and on CD January 28, 2022.  The LP will follow on March 18. To screen the clip, which captures Vai performing in his inner sanctum also known as “Harmony Hut,” click here:  https://youtu.be/bkrmzVMWlLo

The recording is a dark-toned fusion-funk workout.  Steve Vai shares, “In writing the chord changes for the solo section, and the solo itself, I dug deep into my academic music theory mind to create a set of chord changes where the harmonic atmosphere shifted on every change. The dense chord structures required a series of synthetic modes to navigate. This approach is along the lines of jazz and fusion players, but I knew I did not want it to sound anything like that and the solo had to be totally melodic. The results were pretty powerful in that the entire solo section evokes melodic atmospheric changes that shift dramatically but work together well.”

Looking towards the holidays and a new year, he shares, “I am also wishing all a very happy and restful holiday season. You will need it because I predict in 2022, we will all be out there working together again and blowing up that bridge!”

Over the course of a more than 40-year career, Steve Vai has routinely transformed what would appear to be outrageously impossible into something very, very possible… and still also pretty outrageous. From his days as Frank Zappa’s “stunt guitar” player to his more recent expansive and exploratory solo work, Vai has continually challenged notions of traditional guitar playing and composition – and on more than one occasion even reimagined the very instrument itself.

Vai’s newest and 13th solo album, Inviolate, is a nine-song opus that pushes the boundaries of instrumental guitar music.  The body of workpresents his most focused, streamlined and perhaps invigorating music in years. “It’s very ‘Vai,’ whatever that means,” he says, and then laughs. “Someone else might be better than me at explaining what that is. But it’s just very honest music. Because a lot of my records, they’re long and there’s a lot of concepts and playing around with stories. This one has none of that. This is nine pretty dense all-instrumental compositions that I wanted to capture and record so I could get out there and play them live for people.

In essence, it all comes down to finding your own voice, and then having the courage and conviction to follow your musical and creative instincts wherever they may take you – something Vai has never been shy about in his playing. “One of the great things about the guitar is you don’t need to be a virtuoso to express your creative vision,” he says. “I mean, Bob Dylan plays the guitar perfectly well for his expression. So does John McLaughlin. You just need to decide how much technique you want or need to get there. For myself, I came out of the chute wanting it all. When it comes to my music, I don’t feel like I have to prove anything or conform to anything. I just love to think up creative ideas, and then use whatever skill I have to manifest them.”

“An inviolate inspiration is one that comes to you completely pure,” Vai explains. “It appears almost in its completeness, and there’s a recognition of it as being right for you – perfectly right for you. There’s no excuses in it. There’s no fantasy in it, just enthusiasm. There’s a recognition of ‘yes.’ And then you capture that in a way that’s authentic to your unique creativity, and I feel as though that’s what I’ve done with this record.”

Steve Vai will begin an extensive tour of the U.S., with 54 scheduled appearances on January 27, 2022 at the House of Blues in Las Vegas.  It is the first leg of appearances that begins a World tour planned for the next several years. Vai will be joined by his long-tenured ensemble members Dave Weiner (guitar / keys), Philip Bynoe (bass), and Jeremy Colson (drums).  Vai shares, “A performer thrives on performing.  It’s been my life for the past 49 years, with the exception of the last two years, so we are chomping at the bit to get out there and play for people. A music concert has the ability to momentarily dissolve the many challenges we face, and celebrate one of the good things in life, live music.”