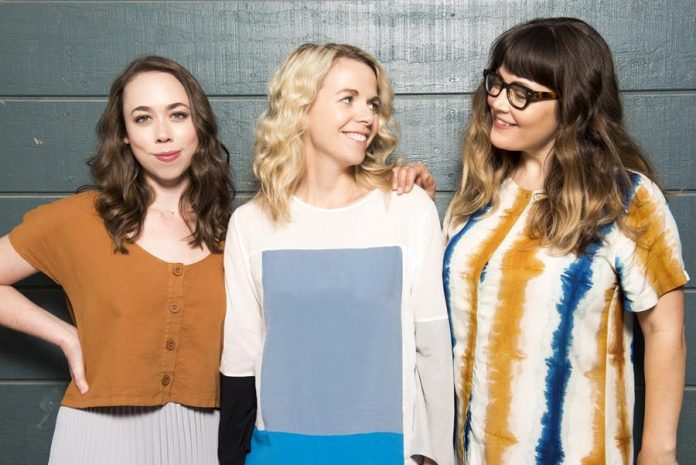 I’m With Her, the band of Sara Watkins, Sarah Jarosz, and Aoife O’Donovan, have announced the release of their full-length debut, See You Around, out February 16, 2018 –

CLICK HERE to pre-order. “See You Around”, the title track from the album, is available everywhere, and today sees the emergence of a beautifully captured live video performance of the song.

. Co-produced by Ethan Johns (Ryan Adams, Laura Marling, Paul McCartney) and the band and recorded at Peter Gabriel’s Real World Studios in Bath, England, See You Around is a 12 track LP filled with finespun narratives and breathtaking harmonies – full track listing is below. Additionally, I’m With Her has announced an international headlining tour that will kick off in March 2018 and bring the band to major cities across the world including Los Angeles, Paris, London, and more.

See You Around presents a warmly textured, yet stripped-down sound layered with lush guitar tones and crystalline harmonies. The album is comprised of 11 originals, penned by the band in Los Angeles and Vermont, plus the never before released Gillian Welch-penned “Hundred Miles.” With each member playing guitar and handling various aspects of the instrumentation— including fiddle and ukulele for Watkins, mandolin and banjo for Jarosz, piano and synth for O’Donovan—the band cut most of the album live, performing just a few feet away from each other in the tracking room. All through See You Around, I’m With Her exhibits a refined musicality that reflects their deep musical roots.

After years of crossing paths in their intersecting scenes, I’m With Her came together by happenstance for an off-the-cuff performance at the Telluride Bluegrass Festival during the summer of 2014.The multi-Grammy-Award-winners have individually released nine solo efforts, co-founded two seminal bands (Nickel Creek and Crooked Still), and contributed to critically acclaimed albums from a host of esteemed artists. The band has garnered tremendous acclaim for their unique blend of instrumental interplay and indelible harmonies.

“We all feel immensely fortunate to be in this band together,” says I’m With Her. “As longtime friends and fans of each other’s music, it’s been wonderful to realize that writing and collaborating together fits so seamlessly into our lives. And now, we’re so excited to get to tour and share the work we’ve done as a band with our debut album, See You Around.”

SEE YOU AROUND TRACK LISTING:

*MORE DATES TO BE ANNOUNCED SOON!*