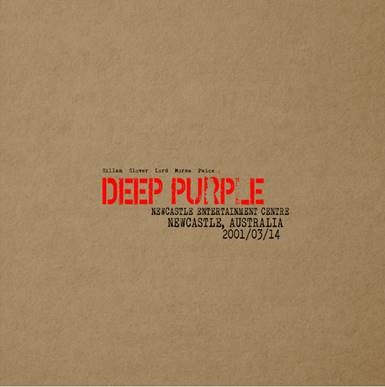 earMUSIC and Deep Purple have worked on a Limited Edition Series, made of very rare live recordings from the band’s archive. 20,000 numbered 2CDs and 2,000 numbered 3LPs will be available worldwide for each release, until sold out.  The series will concentrate on the last three decades of concerts around the world, starting with an explosive show in Newcastle, Australia recorded in 2001. ‘Newcastle 2001’ will be released on 5 July 2019 and was digitally remastered this year.  ‘Newcastle 2001’ has never been available on vinyl before and the 3LP [which includes download] comes on red vinyl!

Some of the shows have been previously available as very rare fan club editions, others will be released for the very first time. All recordings are being remastered for the best audio quality possible.  About this first chapter of the series Roger Glover commented: “After touring Australia in the early 70s, we returned in 1999 with Steve Morse on guitar. Australia had given us a great welcome back and for this night in 2001, we felt like doing something different, so we added singers and a horn section. A rare night and a special gig.”

Deep Purple are one of the most influential British rock bands of all time. With 120 Million albums sold worldwide, they are also one of the most loved British bands ever. Recently inducted into the Rock And Roll Hall of Fame, they have inspired and shaped the taste of generations of hard rock musicians and fans with milestone albums like “In Rock” or “Machine Head” which are essential chapters in rock music history. Their live album “Made in Japan” is often referred to as one of the best (if not “the best”) live albums of all times.

“NOW What?!”, released in 2013, brought Deep Purple back to the top of the charts worldwide. The tour that followed sold over a million tickets worldwide. Deep Purple´s latest album “infinite” (2017) was as successful as the previous album, again #1 in Germany where it also achieved Gold Status for over 100.000 copies sold and charting even better in key territories like the UK, where Deep Purple returned to the Top 10 for the first time in nearly 40 years.