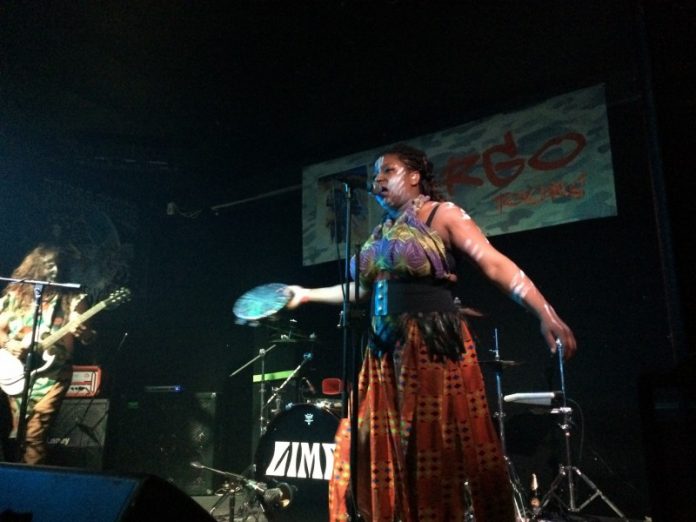 Mickey Mouse, whatever else he is, has never really been synonymous with doom filled Heavy Metal. He might become an horns up emblem yet, if local band Temple Black have their way. Singer/Guitarist Rachel O’Hara hasn’t had time to change, meaning the annoying little rodent is emblazoned on her shirt tonight. In fairness it’s the only thing about the night that isn’t running like clockwork for the four piece, who tread the line between full on doom songs like “Heavy Heart” and more metal fuelled numbers like “Running Wild” very neatly indeed when they mix both as on “My Birth Flame” – which O’Hara says is her favourite song to play – they are particularly impressive. Ending with the fast and menacing “Iniquitous” it seems that the future is anything but dark for Temple Black.

Either Morass Of Molasses love the M40, just like the Midlands, or more likely, just love playing live. Because not even two weeks since their last jaunt here (just up the road in Birmingham) the Reading trio are back for another go. Since MV first clapped eyes on them 14 months or so ago, they’ve got even better – and when you consider they were superb to start with what does that make them now? The answer is formidable (but only because “superberer” isn’t a word) “So They Walk” gets them off to a strangely conventional start, although, just in case you thought they’d grown up, affable frontman Bones The Beard is soon cracking knob gags. The music, though is deadly serious, and bang on the money too. “Ashtabula” is tight and crunchy. “Centralia,” from the yet to be released new record has benefited from the road testing its undergone in recent months and when you add it to the more freeform pair, “Serpentine” and then the phenomenal “Wrath Of Aphrodite” – which prove that they are just a heartbeat away from being a modern day Grateful Dead style jam band – it’s clear Morass Of Molasses are one of the best bands doing this kind of stuff that we have right now.

Sometimes you have to see a band live to have it truly click. Take London three piece Vodun. The other week MV reviewed their new album and loved it. Tonight we saw them live. You can forget the album now, because live they are astounding. The unique melding of African music, psych, soul and metal that Oya, on vocals and assorted percussion, Ogoun on drums and Marassa on guitar have managed really comes through in a performance of incredible power and passion. “Loa’s Kingdom”, as it does on the record, starts things here, but does so with a hitherto unexplored dynamism. “Possession” summons something from somewhere, as the band – dressed in tribal clothes and with painted faces – really find the groove. Even Oya – better known as Chantal Brown once of Do Me Bad Things – seems invigorated in character and her performance here is incredible. On their heaviest number, “Possession” she really does seem to be summoning something from somewhere, and the sheer energy on the last song, the massive stoner thing “Mawu”, is breathtaking. In fact, so good are they here, in front of a midweek crowd on a cold night, there’s a definite prediction to be made: Vodun are but a couple of well chosen festival appearances away from being huge.

After the sheer explosion of noise and colour, another London outfit, Limb come at things from an entirely different – but heavier – perspective. Backlit and smokey, singer Rob Hoey reckons “you don’t want to see us, we are hideous.” Just like the band on before them, however, Limb have the confidence that comes with a brilliant record. Last Autumn they stuck out “Terminal” – their second full length record and the songs from it, for example it’s high point, the Orange Goblin with Ben Ward gargling with gravel of “Ghost Dance” justify the praise it got. “Dawn Raiders” adds a pulsing, psychedelic intro to the the crushingly heavy verses, while “Down By The Banks” – a cover of Johnny Cash – owes as much to Motörhead as it does to country. Arguably the best song comes right at the end. “Cocytus” – the last piece on the album – performs that duty here too and in doing so becomes an almost monolithic beast, as the four piece really let themselves go.

About halfway through their set, Hoey realises what day it is: “oh god, it’s Wednesday. Heavy Wednesday’s!” On this evidence, they are the best kind.